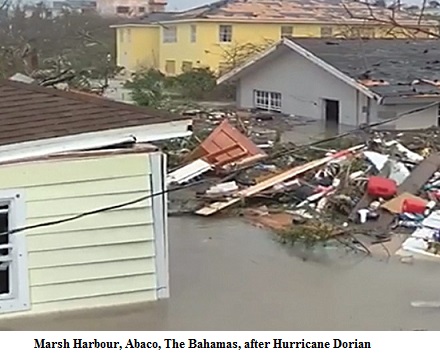 Hurricane Dorian descended on this defenseless island of The Bahamas and unleashed its mightiest power—a travesty never registered in modern day Caribbean. The monster storm rolled its fury at 185 mph, swelling streets, knocking out rooftops, and collapsing buildings. All these were happening under the hopeless eyes and lacerating cries of residents who cowed inside their homes and completely browbeaten. At 11 o’ clock last night, a video surfaced on several social media platforms. It was nerve wracking. In a mixture of Creole and English, came the voice of a man wailing for help. “Mezanmi, Marsh Harbour finish, Marsh Harbour finish,” he cried. Several other men, women and children were following him as sheets of rain pelting their bodies.

No one knows for sure how many inhabitants of this tiny island who have survived the storm or how many who did not make it. In the town’s harbor itself, in the marina, moored boats and cars nearby tossed in the wind like rotten toys in a junkyard.

Abaco is a historical island for Haitian immigrants in The Bahamas. Many of them still live there. They are mostly migrant, farm workers disenfranchised and utterly exploited. They live in flimsy huts unable to sustain even a tropical storm force wind, let alone a killer hurricane like Dorian. Oh, God! Save them!

CSMS Magazine has been trying to reach without success Sylvy Cooper, our correspondent, who lives on the island. All this morning, we’ve been trying in vain to establish contact with several other Haitians there. Understandably, all communications have been severed. Hurricane Dorian, now a category 4, moves sluggishly away from Abaco and begins a relentless fury over Grand Bahama island where Freeport, the country’s second largest city, is now under the gun. According to several news organizations, its international airport has been totally submerged.

Dorian’s next target is the Florida’s east coast where residents have been on edge, bracing for the Grand Slam. Already, its feeder bands are being felt in the outer banks. Lord, have mercy on us!

Note: Ardain Isma, our chief editor, has contributed to this report.