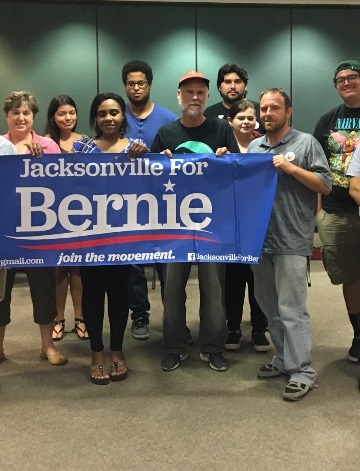 Two weeks ago, I went to a Bernie Sanders’ campaign meeting in Jax. It was held inside the Jacksonville Library, the branch on Southside Boulevard. It was a very interesting meeting designed to organize the foot soldiers. The folks I met were energized. The campaign is gearing up for a major fight in this part of Florida because here, there are mostly two types of Democrats: blue dogs and traditional Dems who want nothing to do with a man named Bernie Sanders.

Despite the odds, the Bernie campaign is making headway, particularly among university students and many disenchanted Democrats, from Fernandina down to Saint Augustine, who are tired of repeated lies from blue dogs. They’re joining Bernie in drove. In Saint Johns County, Trish Becker, the mosquito control lady, a Bernie supporter, was kicked out of the party leadership. The reason? According to Nell Seymour, DNC chairwoman, Trish was too close to the Bernie campaign.

I spoke to Nell a couple weeks ago, inquiring about the Dems’ plan for the upcoming Florida primary. She was quite evasive. Then, I asked for the name of the person representing the Bernie campaign in Saint Johns. She was blunt. “I don’t know,” she replied with a strange form of sarcasm. I was stunned, but it was the same thing I encountered a year ago when I visited the County’s party headquarters. Below is a video I produced back then.