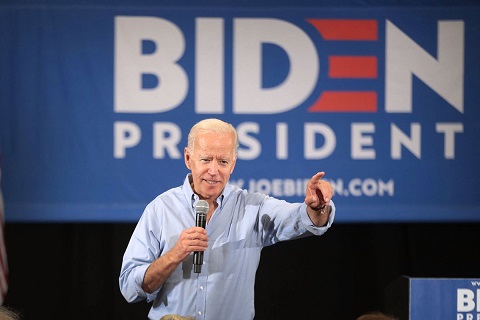 In one of his latest insults yet to people of color, former vice president Biden was caught red-handed, telling a group of wealthy friends at a fundraiser in a New York City hotel Tuesday night how he cozied up with two segregationist Democrats, James Eastland from Mississippi and Herman Talmadge from Georgia, “to get things done” in the senate back in the 1970s.  The even took place inside the exclusive Carlyle Hotel on the Upper Eastside.

Dressed as a buttoned-down technocrat, hands on the hip and elbows turned upward, akimbo, the former vice president, at the prime of his political career, was extremely joyful to be the one at the receiving end of countless of wonderful gifts, well-wishes and, of course, the CHECKS.  As if the cake was not sweet enough, Joe moved to lay some icing on the top before his cheerful billionaire friends. “We were able to bring civility and…. reach consensus under our system,” Joe told them in reference to the two racist senators with whom he had no problem to caucus.” Civility? Eastland, holocaust denier, Jim Crow militant, segregationist to the bone, was dubbed “Voice of the White South” and the “Godfather of Mississippi Politics.” The Klan worshiped him. No need to explain how his hatred for blacks ran so deep in his heart.

But on the Upper East-Side of Manhattan inside that fancy 5-star hotel where the superrich lodge in elegant fashion at about $1000 a night, crafted in upscale dining and storied café, Joe felt safe enough to tell his well-heeled, beautiful people how “he will never demonize the rich, and “what I’ve found in rich people is that they’re as patriotic as poor people. Not a joke.” Then, according to Politico, Joe went on to say that “we can disagree in the margins, but the truth of the matter is that….no one standard of living will change.”

About 100 wealthy donors were present, including former Clinton Treasury Secretary Robert Rubin, former Deputy Secretary Roger Altman and Goldman Sachs Chief Financial Officer Stephen Scherr.  There was no need to explain how elated the group was, rich folks who came in the pursuit of an awesome quid pro quo.

The checks rolled, but the dice were nowhere to be found, for Joe believed no spy was around, and that he was free to speak his mind. These were words from the heart which may have escaped his mouth. Biden claimed the two racist senators never called him “boy.”

“I was in a caucus with James O. Eastland, slipping briefly into a Southern accent…He never called me ‘boy,’ he always called me ‘son,’” the New York Times reported. Joe Biden felt comfortable enough to speak from the soul in a Southern slur.

This is quite disingenuous and blatantly disrespectful to every person of color in this country. Biden, the man who claims to be the unifier who has the wherewithal to unite the country now polarized by racial tensions, did not even have the decency or the sense of humility vis-à-vis the African American community whose vote he desperately seeks to beat Trump in 2020. Of course, the racist senators would have never called him “boy.” He’s Caucasian.

Not surprisingly, Biden’s racist remarks have triggered a political firestorm. His Democratic rivals have finally found an overture to unload on him. From Liz Warren to Kamala Harris to Bernie Sanders to Cory Booker, all want an immediate apology. The Biden campaign has immediately embarked upon a damage control, war footage, and Corporate America is now dying for a scripted apology. They can’t lose Joe, their only hope in the scheme to stave off Bernie’s advance in the race.

Blundering in politics can be devastating. But how do you manage a man whose racism runs so deep? Posting a picture of his interracial family on Twitter, Bill Deblasio, the Mayor of New York City, was blunt on Biden. “ It’s 2019 [and] @JoeBiden is longing for the good old days of “civility” typified by James Eastland. Eastland thought my multiracial family should be illegal [and] that whites were entitled to “the pursuit of dead n*ggers.”

America is now learning about the true nature of the “unifier” who wants to be president of the republic—the man who coauthored the Crime Bill that led to the mass-incarceration of millions of young black males.

Biden will do anything to raise cash, including appealing to Republican billionaire, Trump supporter John Catsimatidis—a New York supermarket magnate—whose fortune is estimated to be $ 3.1 billion. According to CNBC, which broke the news, Catsimatidis declined when Biden approached him, saying he was still committed to supporting Trump. Joe had to wag his tail in kittenish fashion, retreating in humiliation. That event took place last week in the home of Jim Chanos, a wealthy Wall Street short seller.

As of this morning, Biden stands firm, saying that he will not apologize, snapping at those folks who want him to do the mea culpa. It’s time for average Americans to understand Joe Biden is not their representative. He’s not in the struggle to bridge the widening income gap between blacks and whites. He’s not a fighter against institutional racism which makes it possible for African Americans and other minorities to be disenfranchised. The narrative about Biden as if he is the ONLY candidate among the Dems who can defeat Trump is just a myth. Many of the other candidates can soundly defeat Trump. Perhaps Biden will be the next president of the United States, but he will only be the president of the superrich.

Also see: As the Democratic leadership rallies around Joe Biden, America is on track to lose