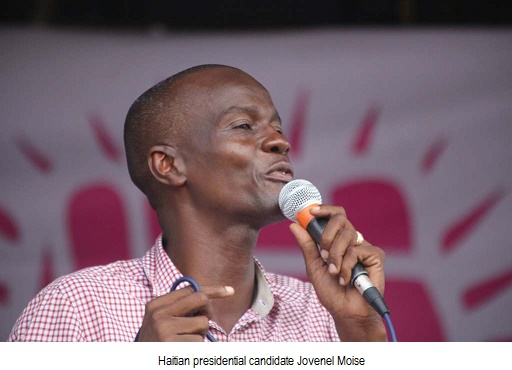 We have learned of a Machiavellian plan to inject fear and apprehension among the population in Haiti. Jovenel Moise has ordered systematic killings of militants in popular neighborhoods in Port-au-Prince as well as in other cities to silence the voices of opposition to his dying regime. In Carrefour, a neighborhood in the southern entrance of the city, hundreds have been reported to be either dead or missing since the waves of massive demonstrations of last week began. Shantytowns like La Saline, Belair in Port-au-Prince, Raboto in Gonaives, Lafòsèt in Cap-Haitien have been subjected to constant harassment by police and men dressed in military fatigues. Many young men have disappeared.

Radio stations in the Haitian capital have reported that Jovenel Moise’s prisons are swelled to the brim. This is nothing new. It was the same tactics used by the Duvaliers to force underground every voice of opposition. It did not work then, it will not work, NOW.  Among the democratic gains conceived since 1986, freedom of speech and freedom of assembly are the only ones left for which the masses in Haiti are prepared to fight to the death to preserve.  Jovenel Moise and his acolytes will have to be surgically removed—and they will. The time is now or never.

The Haitian “president”, accused of stealing state funds and of plotting with foreign interests against a deprived population yearning for justice, has lost his authority to effectively govern. He is a feckless weak link surrounded by henchmen and opportunists, petty bourgeois motivated by greed. They will pay for their criminal misdeeds. Haiti will not only survive this latest chapter of its dark, contemporary history, but it will also thrive.