Haitian refugees forced back into Mexico 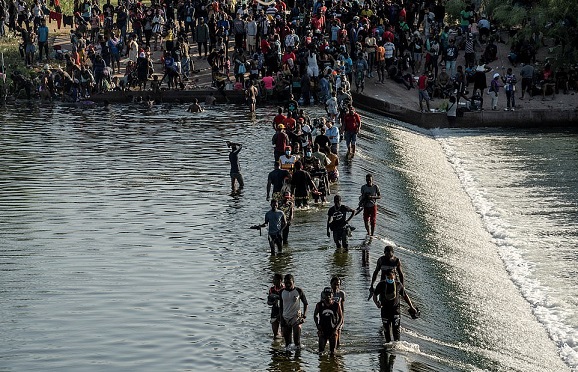 Thousands of Haitian refugees were forced back into Mexico after crossing into the Del Rio, Texas border. This happened on Thursday. They were men, women, and children who took shelter under a bridge with no food and water. Immediately after they arrived, right wing politicians in Texas, with Ted Cruz leading the charge, were asking for their deportation, saying it was “a man-made crisis.” Well, the Biden administration seemed to have heeded their calls.

CNBC just reported that the Haitians were forced back into Mexico to avoid being starved. They were left under that bridge, foodless, homeless in one of the most inhumane conditions.

In a statement released yesterday, Customs and Border Protection said it was increasing the number of agents in the Del Rio Sector and “coordinating efforts within [the Department of Homeland Security] and other relevant federal, state, and local partners to immediately address the current level of migrant encounters and to facilitate a safe, humane, and orderly process.”

In the same statement, CBP said the refugees were in a shaded area in order to “prevent injuries from heat-related illness,” and “drinking water, towels, and portable toilets have been delivered for migrants to use while they await to be transported to a facility.”

Events this morning have refuted this statement. They forced the migrants back into Mexico by starving them, giving them 2 choices: Stay and die of starvation or cross the river back to where you came from. It’s as simple as that. And of course, they know trashing Haitians won’t make a big splash, for in the public opinion, Haitians are the wretches of the Americas.

This is a people who have tried everything within his God-given power to fight for social justice, but every moment of hope has been brutally dashed. Contrary to Ted Cruz’s racist remarks, the Haiti’s crisis is man-made, not the “Texas one.” Haiti’s misery is the direct result of foreign interference in its internal affairs. Under the UN charter, people fleeing their homelands to seek refuge elsewhere deserve due process—in a dignified way.