Haiti on the verge! 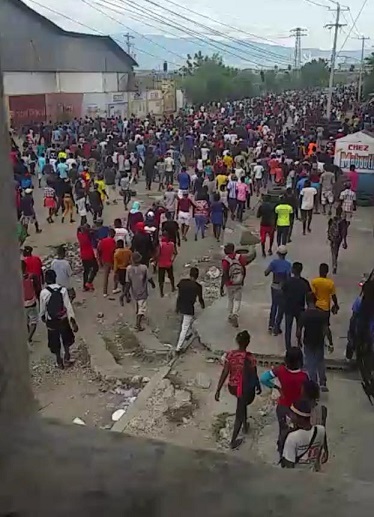 Port-au-Prince is on fire and appears to be on an irreversible course. Now, the struggle has entered a new phase. Government buildings have been set ablaze, shopping districts in affluent neighborhoods have been torched. At the Nadir of his “presidency,” Jovenel Moise has been reduced to fighting to stay alive until his masters tell him to flee. His so-called official statement yesterday, pretending to be in opposition to Sweet Micky, was nothing but a desperate ploy to stall an insurgency that HAS ALREADY reached his doorstep.

In addition, he has lost support from his old “friends” now estranged crocodiles from PV. According to CSMS Magazine’s close sources in the Haitian capital, businessmen in Petionville have reportedly to be furious as they watch their fortune being belched into flame, consumed in a smoke of rage from a people hungry for freedom and democracy.

What we’re seeing now is an angry population in total defiance. To put an end to the violence is the immediate downfall of Jovenel Moise or what’s left of his “government” and the emergence of a unified front with the moral authority and the patriotic will to take over—not recalcitrant politicians bent on hoodwinking yet again a dehumanizing population. Destroying without an organized plan will only exacerbate the furtherance of misery and could provide excuses for the enemies of Haiti to intervene. In the absence of law and order, the formation of a transitional government is urgently needed.

Haiti wants to be FREE—at last! Our beloved country, the land of Dessalines, is on the verge of ridding itself of its parasites. This is a historic moment. Victory is near. Every single battle has been won, not just in Port-au-Prince, but in all major cities and towns. Jovenel Moise’s power structure has been dissolved. Watch the videos below.

In the videos below.