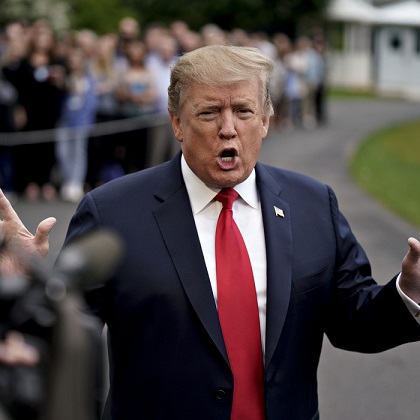 There are many people in this country who vehemently believe being white is an exclusive preserve for which they are prepared to fight to the death. Donald Trump, dull in his thinking and ill-educated to EXPRESS RACISM in its sophisticated, dreaded fashion, once again resorted to its blatant form.  Over the weekend, Trump unleashed a racist Twitter tirade against The Squad — Ocasio-Cortez, Reps. Rashida Tlaib, D-Mich., Ilhan Omar, D-Minn., and Ayanna Pressley, D-Mass. He told them they should “go back” to their home countries before advising America on its governance.

Not surprisingly, the response to these vile, reclusive and vitriolic statements was swift. At a press conference yesterday afternoon, the squad delivered its own rebuttal, calling Trump an empty-headed, crazed man who’s using racial slurs to camouflage his intellectual deficiency, his inability to debate the real issues plaguing our society.

But let’s not forget this racist rhetoric was the launchpad for Trump’s 2016 campaign and it will certainly be his holy sacrament for 2020. It worked for him then, no one can tell him it won’t work for him this time around.

Since 2016, Trump never misses an opportunity to express his xenophobic feelings—racially loaded words used as rocket fuels to energize his base. We all know that; so does the Speaker of the House of Representatives, Nancy Pelosi, who had singled out these four lawmakers, women of color, for being noncompliant as they refused to buy into the Trump agenda for mass deportation of Central American immigrants down at the southern border with Mexico. Feeling belittled and being unable to earn the respect any lawmaker deserves, the women felt compelled to go public, denouncing Pelosi’s unspoken form of prejudice against them.

You ought to be extremely gullible to believe Donald Trump was not going to use this open division inside the Democratic Party for his own political gain. In telling his white audience they are the real Americans and everyone else has his roots somewhere in Africa or in the Muslim world, he is playing the politics of fear—a fear that seems to have played well into the minds of many Americans.

Trump is attempting to rewrite history. Fortunately for us, the billionaire con man doesn’t know how to write, and using bigotry and misogyny is his best tool, he believes, to make cheap, short-term headwinds in reactionary politics.

Donald Trump cannot tell us who is an American and who is not, for his own mother was an immigrant; his wife is an immigrant. Despite our indignation, we should not lose sight on the reality. The best response to Trump and his cronies should be coming from a decisive rejection of his politics of hate at the ballot box. Staying idly by or remaining scooped up in your comfort zone while hoping for a miracle to happen won’t work. You need to get out of your cocoon and hit the road. Trump must not be allowed to make a mockery of our democracy.

As the Democratic leadership rallies around Joe Biden, America is on track to lose