Billionaire Jeff Bezos adds one more item in his resumé 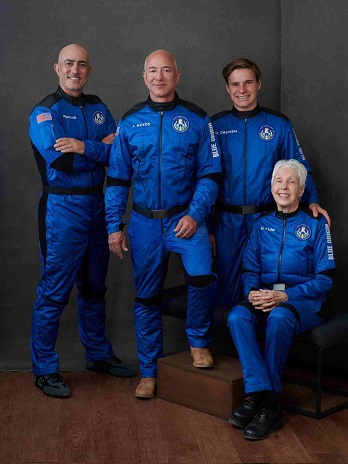 After spending billions on a space program, Amazon founder and billionaire Jeff Bezos and a group of friends and relatives yesterday made a spectacular takeoff on board a privately made “spaceship,’ their new toy. Destination? The edge of space. The West Texas desert was the site of the launch—the scene of an exuberant show filled with playgoers whose mask-less and bare faces were completely aglow as they gleefully watched the world’s richest man embarked upon what seemed a suicide mission.

But Jeff knew what was at stake. A media manipulator, he carefully choreographed the event pompously promoted in the most sophisticated fashion—A GLAMORIZED SHOW, the best picnic money can buy.

For ten minutes, the Dow Jones Industrial Average and other major indexes took a nosedive, as investors waited with abated breath for Jeff’s safe return from space, including his girlfriend Lauren Sanchez who was visibly shaken and found scooped up in the arms of some friends seeking comfort in the late morning heat. Ten minutes later, Jeff made a soft landing before a squad of cheerleaders and quickly made way for the corporate media to play its part.

Lauren 51, could be seen jumping up and down and cheering just before the capsule’s door was opened and Jeff waltzed out flanked by his brother Mark and fellow space travelers Wally Funk and Oliver Daemen. Now, Jeff can claim to be an astronaut.

Many people described the show as a mockery to misery, considering the level of poverty plaguing this world. Bernie Sanders and many of his progressive colleagues in Congress understood the game. They rejected it—for a good reason.