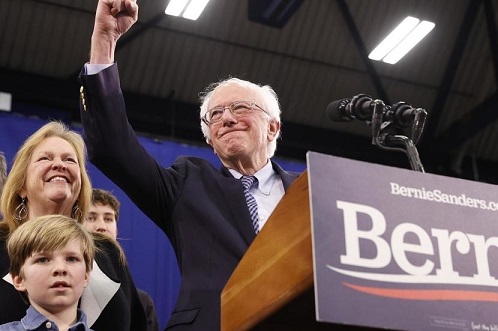 Bernie’s performance in Iowa and his clear win in New Hampshire have sent the Democratic leadership rattled. Adding to the growing scare is Joe Biden’s poor showing. Despite countless of attack ads, reactionary charges and smears, Bernie stands firm and rising like the yellow glow at sunrise. A champion of the poor, an energized Bernie, standing before a cheering crowd, reminded America on Tuesday night that he is committed to defeating Trump, breaking up the big banks, guaranteeing health care for all, moving away from fossil fuels, and free college tuition. This has been a consistent message that was never modified to please the most powerful.

Powerful, they are. They have already mobilized their best weapons: the mainstream media machine, hiring more pundits to spread lies and to engineer the old scare tactic: socialism is bad for America. But the reality on the ground proves that it is not easy to stop the momentum of a politician whose credential and trajectory are unquestionable. The next stop is Nevada, where Bernie is projected to win again. Now, it is no longer the question of whether Bernie can win it all; It is rather the moment to say: How can he lose?