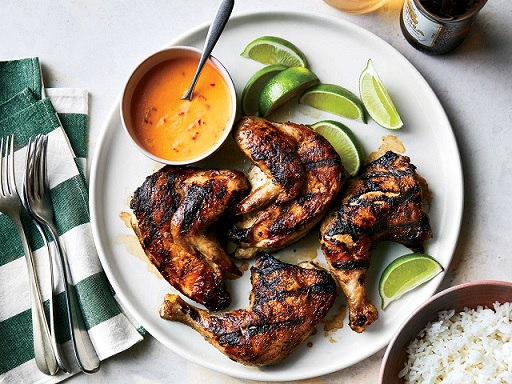 This is a recipe to start the new year on a tasty note.

1 tablespoon grapeseed or other neutral oil

Preheat oven to 350°F. Heat oil in a 12-inch stainless steel ovenproof skillet over medium-high. Season chicken with salt and pepper. Sear chicken in skillet, skin side down, until skin is crisp and golden brown, about 4 minutes. Flip chicken: add shallots, cut sides down, and press into skillet. Cook chicken and shallots until shallots are browned, about 4 minutes. Add thyme and wine to skillet. Bring to a simmer over medium-high; add broth, and return to a simmer. Carefully transfer skillet (so skin of chicken stays dry) to preheated oven, and roast until thermometer inserted into thickest part of breast registers 155°F, about 20 minutes.

Remove skillet from oven. Using tongs, place chicken breasts and shallots on a plate; tent with aluminum foil to keep warm while making sauce. Pour broth mixture through a fine wire-mesh strainer into a heatproof bowl or measuring cup, and set aside. Wipe skillet clean, and return to high heat.

Melt butter in skillet, and add mushrooms in a single layer. Cook, without stirring, until browned on one side, about 2 minutes. Shake skillet to loosen mushrooms; cook, without stirring, until mushrooms just begin to release their juices, about 2 minutes. Add strained broth mixture and cream to skillet, and bring to a boil over high. Reduce heat to medium-low, and simmer, stirring occasionally, until mushrooms are tender and sauce is thick enough to coat the back of a spoon, 10 to 15 minutes. Remove from heat, and stir in tomato, chives, and tarragon; season with salt to taste.