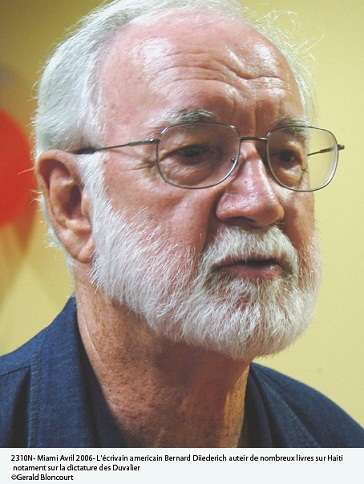 He was one of the most revered writers of our time. Calling him “prolific” was an understatement. Late yesterday afternoon, my good friend Camille Gauthier called me to let me know of his passing. I hadn’t talked to him in a couple years. Bernard was a down-to-earth individual who sat down with me one summer night in 2006 for a lengthy interview on behalf of CSMS Magazine. It was a long conversation in which he told it all to me: his native country of New Zealand, his multicultural backgrounds, his childhood dream of cruising the world, the unexplained adventurism that came to shape his character, and the stroke of luck that brought him to the shores of Haiti where he found love and married his soulmate Ginette Dreyfus.

I met him in for the first time in Mars of 2006 through a mutual friend, Carrol Coates who translated Jacques Stephen Alexis’ famous novel Compère Général Soleil. It was when we commemorated the 45th anniversary of the disappearance of JSA at both Nova Southeastern University and Florida Atlantic University. That event was a project codirected by Dr. Dolores Smiley then Dean of Diversity Affairs at NSU and me. We became friends since then. Bernard was fascinated by the persona of JSA—his cherished and celebrated literary oeuvres—on whom he devoted a big part of one of his later books Le Prix du Sang (The Price of Blood) which x-rays the bloody period living under the dictatorship of Papa Doc François Duvalier. That book was published in 2013.

Bernard Diederich is well-known for his famous books Papa Doc and the Tonton Macoutes and Trujillo: Death of the Goat. Bernard passed away yesterday at his home in Haiti surrounded by his wife, children and grandchildren. He was 94.