Joe Biden: Dethroned while clowning on the biggest stage! 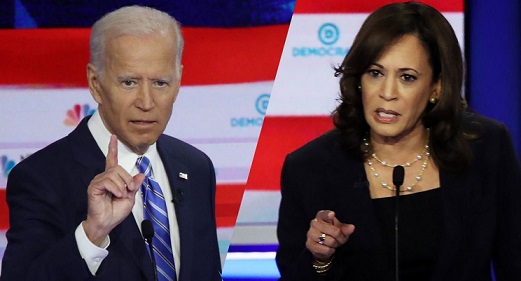 Dwelling in fogs of ignorance and racial bigotry has always been a recipe for disaster in modern politics. In the presidential debate last night in Miami, Joe Biden, the declared Democratic frontrunner in a race that has yet to take shape, reaffirmed this assertion. In what was supposed to be his spectacular entry in political grandstanding, Joe had the demeanor of a deranged individual with hollowed, irreconcilable thoughts. Ten candidates were on the stage, including the former vice president was unprepared and clearly unable to reply directly to every question being posed to him. Instead, he remained aloof and bewildered like a Dixie child meandering down along the edge of a brackish water.

Completely upstaged, Joe Biden seemed a dethroned crown prince on the brink of losing his sanity. The corporate media, did its best to accommodate him, refusing to reiterate questions Joe could not answer as opposed to how they treated the other candidates. Joe is erratic and dull in his thinking. This could easily explain why Biden has been so carefully managed or mismanaged by his campaign managers. He has long been kept at bay, away from journalists and factcheckers. From the get-go, his moves have been scripted because they know the minute he opens up his mouth, the gaffe would be unmistakable.

It was obvious last night when California senator Kamala Harris—the star of the night—framed Biden on the issue of race. Eyes unblinking, Kamala faced the former vice president with such an imposing stare while delivering the fatal blow to the man the Washington establishment is grooming to replace Trump trivia/mania in order to bring “civility” in the way conspiracies are made in the US capital. “I do not believe you are a racist,” she let out. “But it is personal, and it was actually hurtful to hear you talk about the reputations of two United States senators who built their reputations and career on the segregation of race in this country.” Then, she went on to say this: “There was a little girl in California who was part of the second class to integrate her public schools, and she was bussed to school every day, and that little girl was me.”

Growing visibly upset, Biden looked completely defeated. “That is a mischaracterization of my position across the board. I did not praise racists. That is not true,” he said. No one bought Joe’s weak and dishonest rebuttal. Actions speak louder than words, more revealing of one’s true character. He could not explain his alignment with the Dixiecrats in the Senate in the 1970s. Soon after, all hell broke loose from other candidates like senators Michael Bennet and Kirsten Gillibrand who went on the offensive, calling into question Biden’s negotiating skills in the Senate, while Bernie Sanders seized on his vote in favor of the Iraq war.

Biden’s dethronement last night went far beyond his like-mindedness for political miscalculations; it was also a defeat for the upper-class that has been heavily investing in his campaign. As CSMS Magazine reported last week, to the top 1 percent, Joe represents their best hope at conquering their delusional nostalgia and at healing their demographic panic because there are many people in this country who continue to see being white as their exclusive preserve in society. But Joe Biden also represents the failures of white liberalism in American politics. This morning, the campaign is thrown off the track. Can Joe be rehabilitated?

Also see: As the Democratic leadership rallies around Joe Biden, America is on track to lose