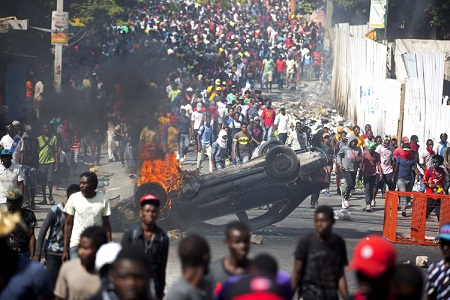 Port-au-Prince–The Haitian government has lost its legitimacy to govern. It has tried everything to silence a population yearning for justice. From coast to coast, the deprived masses—almost the entire population—is rising and demanding change. Several attempts by Jovenel Moise to install a stooge as his new prime minister have failed. According to several news organizations, early this morning, demonstrators ransacked the country’s parliament, throwing human waste all over the so-called the diplomatic quarter where they usually receive foreign dignitaries and PM nominees.

Then, they went uptown, accusing senator Jacques Sauveur Jean and other dubious figures for having been paid thousands of dollars to help engineer the ratification of the new prime minister. Demonstrators stormed several key installations around the city, including police academy. Police officers were completely submerged. Late this afternoon, they burned down Pro Forma an imposing building in the Juvenat neighborhood on the north part of town.

Watch the videos below.