Engaging students and class antagonism in the electoral process 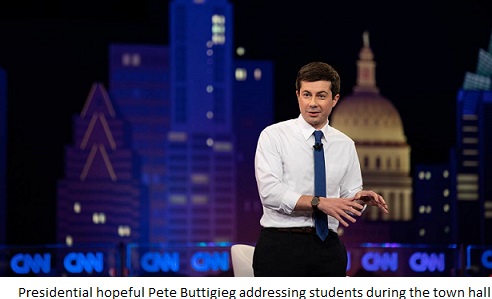 Monday night, CNN and Harvard’s Institute of Politics co-hosted a presidential town hall at Saint Anselm College in Manchester, N.H. It was an event that was designed primarily to capture the attention of young voters as the 2020 presidential election takes shape. Five hundred students from more than 30 States attended. Recent opinion polls have shown a sizable number of voters in the 2020 election will be Millennial—a key constituency that every presidential hopeful courts with competing and feverish attitude. Five of the candidates participated: Amy Klobuchar, Bernie Sanders, Kamala Harris, Pete Buttigieg and Elizabeth Warren.

Prior to the event, students were asked to fill out an application that required them to submit three potential questions for each candidate, as well as three general questions that could be asked of any of the five. It was interesting to watch how politically savvy the students were, asking pertinent questions ranging from climate change, US foreign policy, the Trump administration’s domestic policies, the racial tension polarizing the country, and of course the burden of student debt.

Through the glance of this thought-provoking event, however, one thing caught our attention here in CSMS Magazine. Most of the students who were asked to pose their questions were those from Harvard. Was it an oversight or a deliberate act to showcase Harvard education? Whatever happened to the education provided by the other universities? We think this is a nonchalant and unspoken way to tell young people their chance to become tomorrow’s leaders would be lowered unless they can fight their way into an Ivy league school. Considering the fact that minority students are less likely to attend these prestigious colleges, CNN’s action is disingenuous—at best.