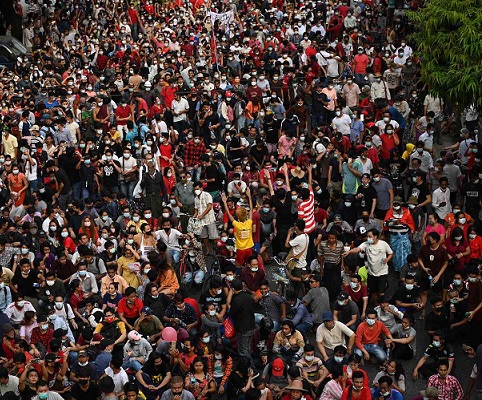 In the face of a sustained repression, the masses in Myanmar hold their ground. This reminds us of Sudan two years ago, when the military government moved to sidestep the popular movement that overthrew Omar al Bashir. According to Associated Press, Tens of thousands of demonstrators poured into the streets of Yangon, the country’s biggest city Wednesday to demand the return of Aung San Suu Kyi who was arrested after winning a landslide election last month. The U.N. human rights commission has rung the alarm bell, warning of a possible crackdown based on recent troop movements in the country.

According to AP, “in Yangon, protesters marched carrying signs calling for ousted leader Aung San Suu Kyi to be released from detention, while others feigned car trouble, strategically abandoning their vehicles — and leaving the hoods up — to prevent security forces from easily accessing the demonstrations. Large rallies were also held in the country’s second-biggest city, Mandalay, and the capital of Naypyitaw, in defiance of an order banning gatherings of five or more people.”

The protest movement has spread all over the country, growing by the day. It’s not sure whether the military generals will yield to the pressure.