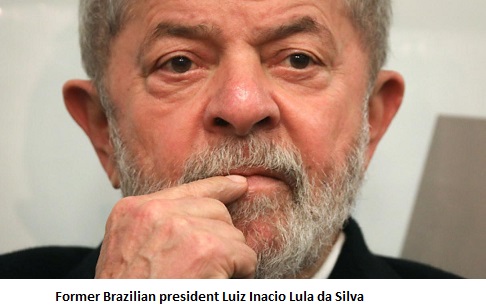 Latin America’s left is in “mourning”, in total consternation, in the wake of Luiz Inácio Lula da Silva’s surrendering to the authorities after a judge in the city of Porto Alegre ordered him jailed on corruption charges—charges Lula vehemently denied. The conviction has spiked outrage throughout the world, for Lula’s, charismatic and champion of the poor, has long been one of the most influential and global figures of the leftist movement in the face of rightwing ascendancy to power in almost all corners of the world.

Not surprisingly, Lula’s incarceration has ushered a wave of indignation—from Cuba to Venezuela to Bolivia to sub-Saharan Africa etc. The action against Lula, who is still favored to win the next presidential election in October by a large margin, is arguably a demonstration of power and confidence on the part of de facto rightwing president Michel Temer himself mired in some serious corruption scandals. Both “Michel Temer—installed in the wake of former PT President Dilma Rousseff’s impeachment last August–and the conservative majorities in both houses of Brazil’s Congress feel they have weathered a series of enormous protests in recent months and can now go on the attack,” says Valério Arcary, a commentator from the Socialist Workers’ website (www.socialistworkers’org)

What started in motion with the impeachment of former president Dilma Roussef ended with a fatal blow to the progressive movement of Brazil by eliminating the man who is without question the darling of the poor, but whom the reactionary upper-class dreads to the core.  Now Lula has been off-staged, it is hard to imagine between now and October the Brazilian Workers’ Party (PT) could master the strength to put forward a unified candidate effective enough to win in October. We’re presenting Arcary’s remarks in its entirety below.

THIS WEEK was sad. The anti-labor reform bill passed, Judge Moro sentenced Lula, and the Constitution and Justice Committee sided with Temer–one after the other. I was dismayed that only a few hundred people came to Avenida Paulista to protest Lula’s sentence. Very few. The only relief was in reading the beautiful writings of Guilherme Boulos, coordinator of the Homeless Workers Movement (Movimento dos Trabalhadores Sem Teto), denouncing the travesty.

But it’s necessary to state things as they are. A disgraceful political ruling convicted Lula, and the popular response was, at least so far, resigned. A left that wants to have a future has to have principles. Sectarianism can’t be its guide.

After all that has happened since 2003, Lula shouldn’t get much sympathy. But those who don’t defend Lula, at least in relation to the courts and Moro, are without question on the side of the Lava Jato scandalmongers. This ruling was political. Moro didn’t even come up with a technicality to hide behind. He didn’t even prove that Lula owned the apartment in Guarujá. The burden of proof is on the justice system: the Public Minister had the responsibility to produce evidence. The accused have the benefit of the doubt.

Staying silent in the face of Lula’s conviction means buckling to pressure from the camp of the ruling class. And not just any camp. It’s the camp that is the majority today, the one that supports Lava Jato.

Defending Lula’s political rights is not the same as defending him politically. It’s simple and obvious–to anyone who can think clearly–that we can criticize the record of the PT governments and also note that the court produced no proof that the apartment belonged to Lula. It doesn’t even matter if we think that Lula is, a priori, innocent of the accusations of corruption. It means defending his democratic rights, because they are democratic rights for all and, therefore, should be inviolable.

Opposing Moro and the abuses of the Lava Jato scandal isn’t the same as defending Lula. Lula isn’t innocent, but we aren’t joining with the bourgeoisie’s executioners who want to destroy him while stripping him of his democratic rights. The attack on Lula is following an undeniable strategy: stopping his run for the presidency in 2018.

As if the decision hardly mattered, Lula still stated that he had faith in the justice system. That is, at the same time that Moro convicts him as a “thief,” Lula reaffirms his faith in government institutions, reiterates his program of class collaboration with the bourgeoisie, and refuses to call the working class–that still counts on his leadership–into the streets to defeat Temer.

Therefore, the unavoidable conclusion is that the ruling class broke with Lula, not the other way around. It’s probably unlikely that he will be a candidate for president in 2018. If he ends up being able to run, which seems far-fetched today, we shouldn’t support him.

But I think that everyone who wants to build a left beyond “Lulaism” should defend the PT’s right to nominate Lula in 2018. This whole operation was designed to prevent Lula’s candidacy. The court in Porto Alegre can’t back down.

THEY’RE PAYING for strategic errors. For years, the PT “beat the drum,” boasting of its tactical victories in winning four successive presidential elections. All of these tactics produced a strategic defeat, possibly irreversible, for the PT, and can have serious consequences for all of the left. That’s because Lula is being convicted for corruption, not for having surrendered to big business. Although division and confusion still reign, an important section of the working class is concluding that Lula’s conviction is legitimate. They didn’t take to the streets to defend him. That’s terrible, but that’s the way it is.

They’re paying for strategic errors. If someone on the left thinks that it’s “progressive” that Lula was sentenced for lying, they’ve understood nothing about what’s happened since June 2013, and especially since the impeachment of Dilma Rousseff. For 14 years, the PT leadership supported, unconditionally, Lula’s policy of negotiation/surrender: to pacify Brazilian capitalism by showing that the left “in power” didn’t represent any danger to their businesses.

They’re paying for strategic errors. Those of us who warned that the PT’s orientation was laying the foundation for defeat remained a small minority for 15 years. As these bitter events unfold before our eyes, it’s now clear that Lula and the PT leadership were wrong. Lula and the PT are paying an enormous price for the strategy of compromising with capitalism.

Class collaboration was always presented as the lesser evil. Now, the bill has come due. The tactic of broad alliances with sections of big business to govern “for everyone” was supposed to be painless. Only it isn’t. “Win, win”–the policy of economic growth underpinned by unprecedented increases in commodity prices–was supposed to sustain reforms, such as boosting the minimum wage above the rate of inflation, without cutting into profit rates. It failed. The limits imposed by contemporary capitalism were stronger.

They’re paying for strategic errors. The illusion that the justice system is neutral is an ideological trap. Neither prosecutors nor judges are impartial technocrats. Neither are they “above” social and political conflict. They exist to provide a means to resolve disputes without resorting to weapons.

Lula’s conviction without overwhelming proof is an attack on democratic rights. It is designed to undermine his leadership. Lula shouldn’t be seen as innocent. He knew perfectly well how the PT financed itself. But those who claim to be on the left, but who don’t oppose Moro’s decision, are staining their reputations.

The PT and Lula didn’t do anything new: they bowed down to money from construction companies and banks, as did the PSDB, DEM and a long list of others. Allying with enemies of the working class under the pretext of a “struggle against corruption” is unforgivable shortsightedness. It’s more than necessary for the Left Socialist Front to challenge the PT with an anti-capitalist platform. But it will not build support by jumping on the bandwagon of the reactionary campaign against Lula.

They’re paying for strategic errors. Insisting on the same strategy, even with different leaders, will have no other outcome except more defeats.