As Evo Morales was deposed in a coup, Bolivians continue to resist 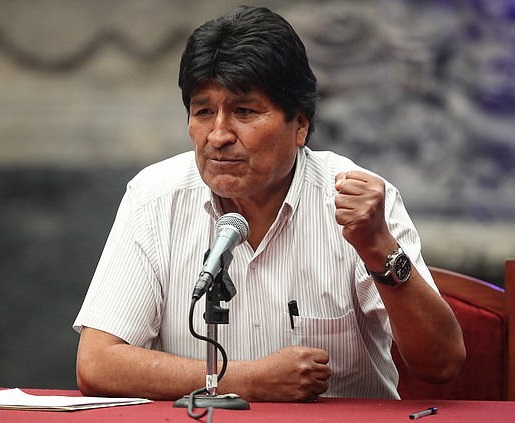 Hybrid warfare was blatantly at play in the coup against Evo Morales last month. After crafting bogus claims of irregularities during the last presidential election and upstaged the country’s duly elected president, fascistic rightwing elements have ushered Jeanine Añez to the presidency, well-known for her racist views against the indigenous population which makes up the majority in Bolivia. The ouster of Morales has left the disenfranchised poor at the mercy of rightwing putschists and fascist thugs. Whether it is in Bolivia or in Haiti, it is the same playbook: creating fictional popular movements to justify coups. Then, they install subservient figures totally beholden to big business interests. And when the masses take to the streets in mass protests, they are met with a bloody repression all in a desperate attempt to save neoliberalism, a socioeconomic and political system now in total bankruptcy. The same reason they want to keep Jovenel Moise as president of Haiti—at all costs—is the same reason why they overthrew Morales. Like in Haiti, the Bolivian masses are fighting back. The protests have been massively sustained as confirmed in the article below by Andrea Lobo, a writer for the World Socialist website.

By Andrea Lobo
Tens of thousands of workers marched on Thursday from the predominantly working class and indigenous city of El Alto to the capital of La Paz—a distance of 15 miles—demanding the ouster of the coup regime that has assumed power in Latin America’s poorest country. The protesters continued to confront military repression into the night.

Jeanine Áñez, the right-wing vice president of Bolivia’s Senate, proclaimed herself president and named a far-right cabinet and new military leadership to organize repression of the growing resistance to the US-backed coup that overthrew the government of President Evo Morales on Sunday.

Expressing widespread sentiments among those protesting, an indigenous worker in El Alto told a reporter, “We are here fighting because we will never again humiliate ourselves and kneel down to these transnationals that have always controlled and humiliated us until today.”

After asking Morales to resign last Sunday, the Bolivian Workers Central (COB), the main trade union confederation, threatened on Tuesday to call an indefinite general strike if the Áñez regime doesn’t “re-establish the constitutional order in 24 hours.” However, no further announcement has been made.

The timid response by Morales, the formerly ruling MAS and its aligned institutions like the COB has exposed their fears that an upheaval against the coup will turn into a political movement to overthrow the capitalist order that they have defended for 14 years.

Morales, who was whisked out of Bolivia by the Mexican Air Force, escaping an arrest warrant and threats by far-right groups, has now called for “talks with the four parties in Congress,” including those that carried out the coup. He has offered to return to Bolivia to help “pacify the country” and has called for the intervention of the Pope.

Right-wing thugs and police on Wednesday blocked members of the Bolivian Senate, including its MAS president Angela Salvatierra, from entering the legislature. Under pressure from the military, Salvatierra had announced her resignation, following the example set by Morales and his vice president, clearing the way for Áñez to proclaim herself president, without any confirmation by the national legislature, in which the MAS holds the majority of seats.

Early on Thursday, MAS legislators met and elected Sergio Choque as president of the lower chamber. Choque is a deputy for El Alto with a background in the Federation of Neighborhood Councils (FEJUVE) in the city that has largely led the anti-coup protests. He first called on “all mobilized sectors to calm down,” and then promoted a bill ordering the military to return to their barracks—an attempt to feed illusions that the military will obey the forces it just overthrew.

In recounting his escape to El País, Morales stated that “the United States called the foreign relations minister to tell me that they could take me anywhere. That was strange to me.” He opted for asylum offered by Mexico, which failed to convince Perú to allow Morales to use its airspace to fly there. Ultimately, the right-wing governments in Paraguay and Brazil agreed to facilitate Morales’ escape.

The coup regime has deployed bombers to fly over mass rallies, tanks and Humvees to patrol city centers and riot police and helicopters that have fired live rounds and tear gas into protests. Military and police caravans have terrorized working class neighborhoods. Local news outlets have reported on social media that many more have been killed in the towns surrounding La Paz, and that several national and local radio and tv stations have been taken off the air.

The Prosecutor’s Office has recognized that three protesters have been killed since Monday. In total, ten people have died and at least 400 have been injured since the October 20 presidential elections, which showed Morales winning with the lead needed to avoid a runoff.

Congress, where the MAS holds majorities, did not ratify the resignations of Morales, his vice president and the president of the Senate. Áñez was “confirmed,” without any legislative quorum, by about 20 opposition senators, surrounded by members of the military and the fascistic right-wing opposition. Despite this, the Constitutional Court ruled in favor of Áñez as the country’s legitimate president.

Washington, which denounced Morales for “stealing” the election on October 22, was the main instigator of the coup and the first to recognize Áñez as “interim president.”

However, eager to get on with the business of plundering the vast gas and mineral resources in the country, numerous other capitalist governments have recognized Áñez, including Brazil, the European Union and Russia, which has extensive contracts in Bolivia. Sergey Ryabkov, the Russian undersecretary of foreign relations, declared that “We view everything that preceded the power shift as actions that equal a coup… but it’s clear that she will be perceived as the leader of Bolivia until the issue of electing a new president is settled.”

Among those replaced by Áñez was the commander of the Bolivian armed forces, Williams Kaliman, who had “suggested” to Morales to step down on Sunday and placed the presidential sash on Áñez on Tuesday. The Argentine daily Infobae reported from “military sources” that there were demands for the army “to act on the streets against the protesters, but some commanders under Kaliman resisted,” leading the Áñez to assign a new leadership.

The new Interior Minister, Arturo Murillo, immediately announced, “I spoke with the new Defense Minister [Luis Fernando López Julio], a very interesting person to work in partnership with. We’ll have the military and police on the streets giving people security… All those in sedition will go to jail; we’ll pursue you.” The new minister of Communication, Roxana Lizárraga, announced that “the rule of law will be used against those journalists or pseudo-journalists involved in sedition.”

Meanwhile, the new minister of the Presidency, Jerjes Justiniano, is the lawyer of Luis Fernando Camacho, a fascistic businessman from Santa Cruz who became the face of the anti-Morales demonstrations since the elections. Far-right groups led by Camacho and presidential runner-up Carlos Mesa partnered with the Organization of American States (OAS) to exploit a one-day halt in the announcement of vote totals to allege an electoral fraud, without presenting any evidence.

The US-based Center for Economic and Policy Research (CEPR) published a report last week stating that the final result was not in contradiction to the trend before the broadcasts stopped, arguing that there is “no statistical or evidentiary basis to dispute the vote count.”

As far-right flying squads were seen attacking indigenous protesters and passers-by in several cities, Camacho used “anti-establishment” demagogy to tap into growing social anger among sectors of the middle class and some politically disoriented layers of workers.

Highlighting the dangers presented by the fascistic layers being elevated by US imperialism, both Camacho and Áñez have long expressed the racist outlook of the landed oligarchy of the lowlands, which has historically oppressed the country’s indigenous majority and sought to divide the oppressed layers of the population.

“I dream of a Bolivia liberated of the indigenous satanic rituals; the city is not for Indians; they should leave to the highlands or Chaco,” Áñez declared in a 2013 tweet that has recently been scrubbed. In his rallies, Camacho continues to call for freeing Bolivia from “Satan” and “witchcraft.”

Note: You can read more about this story by visiting the World socialist website: www.wsws.org