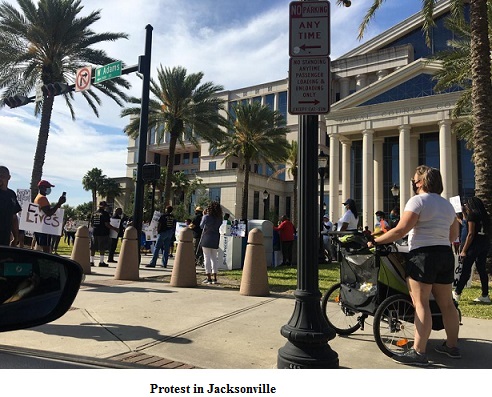 Yesterday afternoon, downtown Jacksonville near the Court House was the scene of a mass protest against racial injustice committed in Brunswick, Georgia in last February when two white supremacists gunned down 25-year-old Ahmaud Arbery when he was jogging in one of the neighborhoods outside of Brunswick.

According to news reports, the DA’s office in this Georgia southeastern coastal town did very little to bring the killers to justice until a video of the killing surfaced a few days ago. But in a letter written by George Barnhill, one of the district attorneys, who has recused himself from the case and who saw the autopsy report, Arbery sustained three wounds during a struggle with one of the assailants.

The cold-blooded murder took place on February 23 when Gregory McMichael, a former police officer, and his son Travis chased Arbery down, authorities said. According to a Glynn County Police report, McMichael later told officers that he thought “Arbery looked like a person suspected in a series of recent break-ins in the area.”

The killing has triggered outrage across Southeast United States, and Jacksonville was in the middle of the mass protests this afternoon, despite the pandemic. Covidiots of all races, black, white, and others were chanting “No justice, no peace,” as you could see in the video below.