Venezuela: The Guaidó’s scheme is unraveling 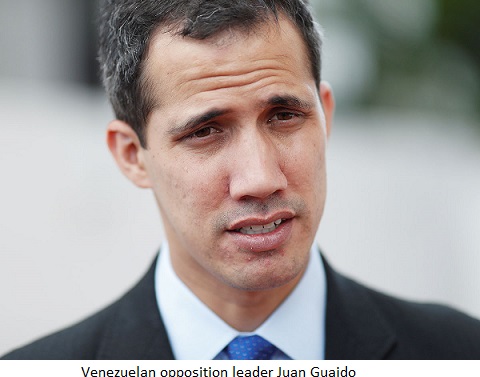 On January 23rd, 2019, Venezuelan opposition leader Juan Guaidó self-proclaimed president of the Republic before a cheering crowd numbered in the thousands. It was a pompous declaration that immediately captured the attention of the world, not because he had emerged victorious in some hotly contested election, but because it was inconceivable for a man—unless totally crazed—to do such a thing. Guaidó was not a presidential candidate; nor was his self-nomination a part of a national consensus to lead the country in a transitional period. He is the opposition leader in Parliament.

Guaidó claimed his move was constitutionally justified because, he said, the country was on the brink of collapsing. He said Nicolas Maduro, the current president, had failed to live up to his presidential duty, and by holding on to power, he had become a “usurper.”

Guaidó, however, was not crazy. He knew he was playing a very important proxy role in the quest to reconquer what was lost 30 years ago—the country’s vast mineral resources. Guaidó knew he was not alone; nor was he counting on the fragmented Venezuelan opposition and even on the thousands of his supporters sheering him. He knew he had the world’s most powerful people overtly leading him. Minutes after he made his dramatic announcement, the neocons in Washington heeded his self-proclamation. Mike Pence, in a prepared speech, officially recognized Guaidó, setting the stage for rightwing Heads of State in Latin America to follow suit. Then it was the European Union’s turn to play its part in the charade. They hesitated. They needed a cover. Canadian PM Justin Trudeau provided it. In calling Nicolas maduro “a brutal dictator,” he congratulated Guaidó for taking this “courageous” step.

While liberals and progressives around the world seemed surprised over Trudeau’s blatant endorsement of the failed coup, the Canadian prime minister was far from being a foolish dude. He was defending Canadian interests in Venezuela. It was not oil Trudeau was going after. He was creeping his way towards the gold mines of which several Canadian companies hold the lease. The boyish and innocent face of the stylish Canadian PM may have been just a farce. His popularity is now in freefall. Two of his cabinet ministers resigned last week after accusing Trudeau of preventing the Attorney General  Jody Wilson-Raybould from testifying before parliament over allegations that senior officials tried to interfere with the prosecution of an engineering firm accused of bribery. So, Trudeau’ s cover for Juan Guaidó holds no weight, and the neocons in Washington know it.

Until January 23rd, Guaidó was an obscure figure, except for those who were grooming him for the standup comedy, the same way the Republican Party mentored David Duke, the Grand Wizard of the Klan, when he ran for president in the primaries in both 1988 and in 1992.

At first, it looked like a tragicomedy foreshadowing the craziest political drama in modern Latin America’s history. The only missing element in this dangerous game was the country’s powerful military that refused to take part, citing its obligations to respect the constitution and that it only recognized one president: Nicolas Maduro, who was democratically elected. Then, the coup-in-progress hit a major roadblock.

Meanwhile, enemy number one, Nicolas Maduro, remains undeterred. He controls the country’s power structure and he has been able to demonstrate that Guaidó does not own the streets. Despite the economic downturn, millions of Venezuelans still support the government, and they appear ready to defend their country against foreign invasion. The large pro-government demonstrations speak for themselves. Threats like “All options are on the table” do not intimidate Maduro and his generals whose fates and that of Maduro are symbiotically linked. They also have some giant backers of their own: Russia and China.

The coup effectively failed on February 23rd when the security forces denied entry to humanitarian supplies from the United States. Guaidó, who had been making empty threats, sneaked into Colombia and met with Iván Duque, Colombian president. On that day, Guaidó was supposed to commandeer one of the humanitarian trucks into Venezuela. In fact, he was spotted at the driverseat of one of the trucks stationed at the border under the gleeful eyes of Duque, neofascist and brother in arms. But this was only for a photo op before a myriad of foreign journalists who lined up to capture the “iconic” moment. Shortly thereafter, Guaidó was nowhere to be found, melting like frosts at sunrise.

Since then, Juan Guaidó was reduced to a political nuisance, a hollow freak poised to fade in a smoke of political drama. Last week, we saw him in a demonstration in Caracas, desperately calling for US military intervention in his own country. Never before, a political clown, has publicly called for others to come to occupy his country. In doing so, Guaidó has fast-forwarded his grand entry into the dustbin of history.

Now, for all practical purposes, the Guaidó’s option has been used up, and the ONLY option left on the table for Bolton and his crew is the military one. That option seems real because this week, Mike Pompeo announced the withdrawal of American embassy staffs from Caracas. While some folks think this might be a victory for Maduro, it looked more like clearing the field before the “open season.” The warmongers never give up too easily.

The Making of Juan Guaidó: how the US regime change laboratory created Vnezuela’s coup leader by Cohen and Blumenthal.

Ardain Isma is a novelist and editing manager at CSMS Magazine . He heads the Center for Strategic and Multicultural Studies. He also teaches Introduction to Research Studies at Embry Riddle University. To see his books, click here.