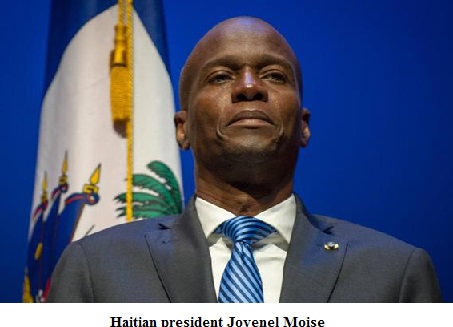 Whenever an unpopular regime faces massive discontent, such as the case of Haiti, repression, manipulation, scapegoating and diversion become its survival tools. President Jovenel Moise, an apprentice dictator, seems to have learned this awkward reality. Besieged by a defiant population determined to rewrite history in its quest for social justice, President Moise has resorted to using the country’s weakened power structure in a desperate move to forestall waves of protests with no end in sight. He has embarked upon a chilling repression against militants in the popular neighborhoods while coopting a large portion of the Haitian media through bribery and coercion. Now, using the justice system, he is taking on the business community—especially those who do not cozy up with his increasingly autocratic rule. In this compelling article below, Bernard Fils-Aimé—a former CEO of Communication Cellulaire d’Haiti (ComCEL) and ex-president of the American Chamber of Commerce in Haiti (AmCham-Haiti)—sheds some light on Moise’s Machiavellian politics.

But rather than tackle real issues in the country, he has set his sights on the business sector––the energy sector in particular––as the root of all that ails the country.

While carrying out this mission, he is arbitrarily misusing the state’s authority and judiciary for political gain and taking a perilous path to authoritarianism, as he turns a commercial dispute into a criminal matter in order to distract the Haitian public from his disastrous rule.

In a tactical diversion, President Moïse has been publicly attacking the independent electricity producers E-Power, HAYTRAC and SOGENER.

President Moïse is politically weaponizing the state apparatus and the Haitian justice system.

He has arbitrarily ordered the unilateral termination of the electricity contracts, ignoring both the legal framework defining the ways and means of conflict resolution, and the international conventions to which Haiti has formally subscribed.

Blinded by a need to divert popular discontent, he and his advisers do not fully appreciate the consequences of this arbitrary act on future investments and upon the supply of electricity to the population.

Adding to all of this, his government has now issued arrest warrants for the board of directors of SOGENER, the widow of late President Rene Preval and former ministers of the Preval/Alexis government, which signed addendums to the original 2005 contract.

Stuck in a self-made crisis engulfing his mandate, Jovenel Moïse is seeking to mask his ineptitude by returning Haiti to the days of authoritarian rule. The Haitian legal system is being held subservient to the will of the country’s “supreme leader” and this should be cause for even greater alarm.

The president has been deliberately silent on the serious fall of the Haitian currency, the record budget deficits and double-digit inflation, the mishandling of the oil market crisis, the numerous corruption scandals and the squandering and theft of PetroCaribe funds by his political family.

He has intentionally concealed the difficulties confronting the state-owned power company, Ed’H, in distributing and marketing the electricity produced, which is the real source of our energy problem.

This is what has kept that entity in a state of permanent bankruptcy.

There may indeed be a need for a revision of these contracts and the re-engineering of the whole sector as well, in order to create better conditions for attracting much needed investments in the country.

But in a demagogic move, Moïse prefers to criminalize the energy producers rather than simply renegotiate the contracts.

In a country suffering from chronic blackouts, the president finds in the private power-providers the ideal scapegoat to divert the public’s attention from the real problems of the moment.

He dismisses the fact that his name is quoted 69 times in the official corruption report on Venezuela’s PetroCaribe agreement with Haiti.

Further he is accused, along with his wife, of having illegally contracted DERMALOG, a European firm, to create a new national identity and voting card for Haitians, despite the persistent objections of government auditors and several members of Parliament. In addition, he refuses to provide any public accounting of how his administration has spent funds in several government agencies, programs and contracts.

Our president-entrepreneur should not forget that it is this same judicial apparatus that he is now attempting to dismantle that will have to guarantee him a fair trial when the time comes.

So far, the United States and the United Nations — which continues to run a small human rights mission in Haiti — have remained silent.

But the Haitian public should know their opinions on these autocratic excesses and kidnapping of the judicial system by the executive branch.

After all, the U.N. mission is mandated by the Security Council to advise the government on political and legal issues.

Legal principles and fundamental rights are being trampled by a corrupt, illegitimate and unconstitutional government.

The democratic gains of 1986 are now threatened. Individual freedoms and the rule of law are in danger.

Let us wake up!

Note: This article was first published in the opinion section of the Miami Herald.

As mentioned above: Bernard Fils-Aimé is a former CEO of Communication Cellulaire d’Haiti (ComCEL) and ex-president of the American Chamber of Commerce in Haiti (AmCham-Haiti).

You can also read: Jovenel Moise’ police brutality exposed before US Congress

Haiti: The high-pitched cry for freedom and democracy