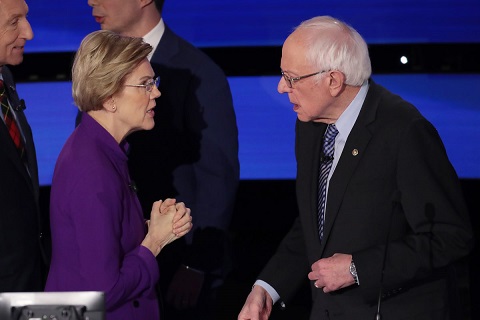 After days of rumors, accusing Bernie Sanders of being sexist, the political debate on Tuesday night confirmed the disingenuousness that has always existed in the Elizabeth Warren campaign war machine. It is hard to imagine that someone who has built her political capital on her “progressivism” could agree to pull a stunt that only desperate politicians could contemplate.

Everyone knows that Bernie Sanders’ honesty has never been called into questions, especially when it comes to attacks against women and other disadvantaged groups of society. All this happened in the wake of Bernie Sanders sudden rise in the polls. The Warren campaign accused Bernie Sanders of being a chauvinist after a supposedly private conversation he had with the female senator of Massachusetts about women and their inability to win the presidential election.

The fake story was leaked to the media and was quickly picked up by BuzzFeed. The rest? It went viral, trending on all the social media platforms: from Twitter to Facebook to Instagram etc. In a robust reply on the debate stage Tuesday night, Bernie Sanders told America that back in 2015, he tried to convince Warren to run for president. Warren declined, which prompted him to run in 2016.

As we all know, after Sanders lost the primary to Hilary Clinton in 2016, he participated in 40 rallies, campaigning for Clinton. Warren tried to use the sexist playbook and it backfired despite CNN pushing the agenda. Overall, Americans saw right through Warren’s staffers strategy the deceptive politics professed by Hillary Clinton’ advisors back in 2016. Obviously, it did not work. According to a post-debate poll by the New Hampshire DNC chair, Sanders leads by 23 percent and Warren is at fourth place at only 14 percent.

The New Hampshire poll explains the surge is contributed to Sanders’ profound conviction on health care, especially his Medicare for all plan, and most voters rate healthcare as an important issue and trust the Sanders plan overall.

Furthermore, a Reuters post-debate poll puts Sanders in the lead again at 20 percent and Warren falls to third place at 12 percent. According Reuters, Americans care more about the issues and not about a remark said in a private conversation that may have never happened over a year ago.

The attack on Sanders reveals a lot of negativity and hypocrisy that exist in the Warren presidential bid. The fake sexist attack on Senator Sanders didn’t make sense because majority of Americans in both sides of the political spectrum pretty much agree that Sanders has always been a champion for women’s rights since the beginning of his political career.

If you are truly going to attack Sanders, then it is best to do so on the debate stage talking about policy matters related to the domestic issues that truly concern most American voters, like health care, climate change, the housing crisis, immigration, and education.

Note: Ardine Isma, the daughter of Dr. Ardain Isma, is a contributor to CSMS Magazine and usually reports on arts and cultural issues.