A conversation with author E.G. Radcliff 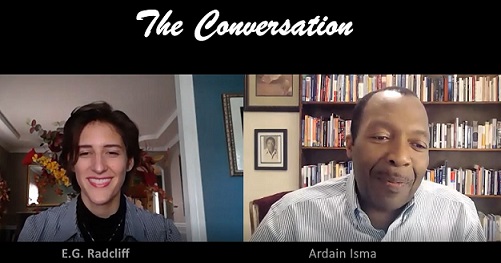 Last week, I had the privilege to speak with E.G. Radcliff, a Chicago based author and an influential member of our writing community on Twitter. She has written a compelling fantasy novel titled Wild Court. This novel is part of a series titled The Coming of Áed.

Áed, the protagonist, is an intriguing king who is determined to defend “his kingdom and the people he loves.” But during his reign, the king “finds himself catapulted into a realm as unfamiliar as it is dangerous, where magic is king and wild courts vie for supremacy.”

Like all fantasy novel, the hero seems omnipresent. I asked E.G. if Wild Court is the final book in this particular series. “I think it’s going to be the final one in the main series. Over the past year, I fell in love with these characters, I’ll probably do a couple of spinoffs, but no promises.” She laughed.

I like E.G.’s style of writing—a dazzling finesse that I commonly find in historical novels. I fact, when I asked her if she would contemplate of going historical as another genre, she says she has always thought about it. E.G. speaks of her novel with meticulous details and with an easiness that has the magic to capture bewildered readers and instantly trap them to be part of her increasingly important readership.

Like most writers, reading and writing have long been a passion for E.G., as she told me. Behind her relaxed demeanor, the passion in her eyes is unmistakable. “And I also thought for a while when I was young, it was a kind of way for me to process anything that happened….[and I also thought] skill building early in life, which I wasn’t thinking of it as skill building, had influenced my love of [writing] later.”

To learn more about E.G. Radcliff’s works, you can visit her website.