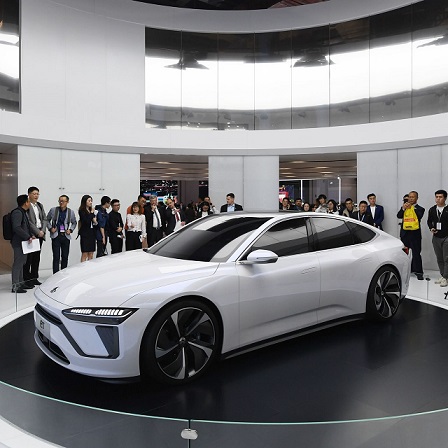 Last week’s market scare was truly one to remember. But was it the correction everyone had been anticipating? Although the broader technology market appeared to have been in freefall, one sector suffered the most: The electric vehicle sector, and one Chinese company in particular: NIO, China’s number one EV maker. But according to Luke Lango, Editor, Hypergrowth Investing, a smart investor should buy the dip of a stock when it is on sale before it shoots higher again. At one point, NIO was selling as low as $34 a share, almost a 50% loss from its all time high at $66 in early February. In the article below, Luke Lango explains why, as a smart investor, you should always buy the stock when it’s trading lower.

Buy the Dip in NIO Stock Before It Drives Much, Much Higher

This dip is a great buying opportunity.

NIO’s delivery numbers are a bit choppy right now because of one-off noise, including the Chinese Lunar New Year Holiday and semiconductor chip shortages as a result of the Covid-19 pandemic. However, this noise will pass.

Because of its strong fundamentals, it’s likely NIO stock will double-test its recent low around $45, hold that level, and then bounce back toward $70.

NIO stock dropped 10% after the company reported Q4 earnings. Why? Because deliveries failed to impress.

February deliveries fell 23% month-over-month, following a multi-month stretch of sequential gains. Then, to make matters worse, management said on the conference call that production volume would have to tap out at 7,500 vehicles per month in the second quarter of 2020 — versus what was supposed to be 10,000 vehicles per month, with the drawdown due to a global semiconductor chip shortage.

Those aren’t great bits of news.

But here’s the thing: They are temporary headwinds.

The February delivery decline is due to the Chinese Lunar New Year Holiday in the month, during which consumers tend to hold off on big-ticket purchases. That holiday is now over. In March, deliveries will get back to into “ramp” mode.

Meanwhile, the chip shortage has a longer impact here. But not that long. Factories around the world are already getting back to full production. By the summer, this chip shortage will be old news. NIO’s production volume will scale back to 10,000 vehicles per month by early Q3.

All in all, this business is still firing on all cylinders, save a few near-term headwinds that will pass.

Because the underlying fundamental business trends remain favorable, this dip in NIO stock will be short-lived.

I’m looking for NIO stock to retreat back to and test its recent low of $44, which it hit just last week amid rising rates fears. This will be a “double dip” test. If NIO stock passes this test — and holds its recent low — then that’s a pretty strong sign that the recent selloff in NIO stock is drawing to a close.

I suspect NIO stock will pass this “double dip” test. That’s because rates have calmed down, while NIO’s earnings report underscored that the business is still firing on all cylinders today.

To that end, I see this selloff in NIO stock as being in the ninth inning. It will end. Soon. And at prices not much lower than where the stock trades today.

As a result of the company’s earnings report, I’m actually revising my estimates on NIO higher, despite the plunge in NIO stock.

That’s because I was impressed by a few things in the report.

First, the 23% sequential drop in deliveries in February is actually impressive. Two years ago, February deliveries dropped 56% month-over-month. All things considered, then, a 23% drop is actually very resilient.

Second, ASPs are strong. They clocked in around $58,000 in the quarter. That’s up 18% year-over-year and 7% quarter-over-quarter. As a result of this ASP strength, I’m revising my long-term ASP targets  higher.

Third, margins are performing ahead of expectations. Vehicle and gross margins both soared above 15% in the quarter. They are rapidly closing in on 20% — and NIO is far from reaching scale. Long-term, I think gross margins can rise to the upper 20s.

Consequently, my modeling now suggests that NIO will do about $6 in earnings per share by 2030. Based on a 25X forward earnings multiple and a 10% annual discount rate, that implies a 2021 price target for NIO stock of $70.

I think that’s where shares will trend after bottoming out around $44.

NIO’s earnings report was hit by short-term headwinds. Those headwinds will pass. When they do, the company’s long-term tailwinds — strong demand, healthy ASPs, new car launches, global expansion, etc. — will come back into focus, and drive NIO stock to new highs.

As a result, I still see NIO stock as one of the top growth stocks to buy today.

Note: Here is the link to the article: Buy the Dip in NIO Stock Before It Drives Much, Much Higher