Wholesale crime is being committed in Haiti 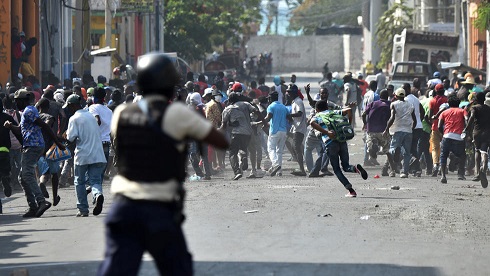 Port-au-Prince, Haiti–In his inability to neither govern nor resolve the crisis of his own making, embattled Haitian president Jovenel Moise is increasingly using deadly force to suppress the popular rebellion. Yesterday in Carrefour Marassa, a crossroads near the town of Croix-des-Bouquets about 10 miles outside of Port-au-Prince, security forces moved in just after nightfall to dislodge groups of militants who controlled several roadblocks as part of a nationwide campaign to get rid of the president accused of corruption and other crimes. Eyewitnesses said they were about 400 men in police uniforms. Gun fire erupted. Using rocks, empty bottles, and whatever they could find, the militants, who knew their neighborhood, offered a ferocious resistance which repelled the police special unit.

Today, across the Haitian capital, especially in the popular neighborhoods, armed men backed by police special units, now called “poligangs” in reference to gang members dressed in police uniforms, engaged militants defending their roadblocks in hand-to-hand combats. The death toll is rising. Stories of men and women who lost their spouses in the fight against Jovenel are a shocker to listen to. A woman named Gertrude collapsed in the hands of a group of people. Her husband of 12 years was found on a ditch, lying lifeless, leaving behind 4 children and a mother who didn’t even know where she was going to find the next meal for her kids, let alone when and how she was going to bury her husband. A 7-year old boy also lost his dad whose body was found bullet-riddled behind one of the roadblocks in the neighborhood of Tabar. And the list goes on.

The resistance is now shifting from peaceful protests to full scale confrontations. This was the case in the city of Gonaives, some ninety miles north of Port-au-Prince, where well-armed militants yesterday seized control of the city center as thousands of anti-government demonstrators roamed the streets, crying Aba Jovenel! It was the same story 40 miles to the south in the city of Saint Marc where defiant protesters took control of the city. Despite this appalling cruelty unleashed upon a deprived people, the defiant Haitians are more and more convinced they’re the ones who will have to surgically remove Jovenel. They are ALONE. For this, they’re willing to fight to a bitter end.