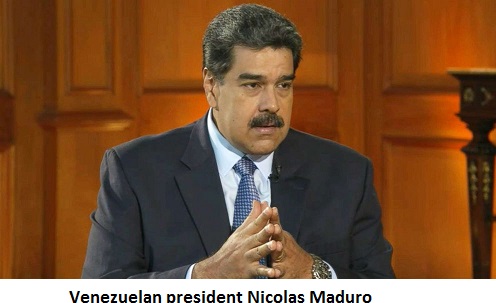 In the end, we will not only remember the crimes of our enemies but also the indifference of those who pretended to be our friends but stood by and did nothing. (Midnight at Noon)

This could very well be the introductory line of a bloody novel depicting the latest chapter in a protracted covert war for regime change in Venezuela. Recent events in the Bolivarian country seemed truly scary, especially when neocons like John Bolton, Mike Pompeo, Marco Rubio and Elliott Abrams are openly beating the drums of war against the government of Nicolas Maduro. In the logic of geopolitics, Venezuela has fallen victim, not because of the political firebrand of the country’s president, but because of the precious commodities hidden beneath its soil. Oil, diamond and gold are some of the natural resources.

The election of Hugo Chavez in 1998 brought an end to decades of an opulent lifestyle enjoyed by a recalcitrant upper-class remote-controlled by Washington. Since then, reconquering what was lost one summer night has been an obsession. In January of 2002, Pedro Carmona, president of Caracas Chamber of Commerce, Carlos Ortega, leader the country’s largest trade union, and top generals of the arm forces staged a coup against Chavez—a coup decreed by the then George W. Bush administration CIA Director George Tenet. Chavez was arrested, and Carmona declared himself interim president. The coup failed when army officers loyal to Chavez moved against the coup plotters—all gathered inside Miraflores Palace in an urgent meeting to forestall popular discontents while more than a million people stood outside and threatened to storm the presidential palace if Chavez was not released and returned to the presidency.

However painful that brief episode was, it provided a golden opportunity for Chavez to shake-up the military hierarchy. He went on to reorganize the arm forces, making the Venezuelan army and those of Nicaragua and Cuba the three military forces not under effective control of Washington. It was not surprising when 2 weeks ago on Fox Business, Bolton dubbed these three countries “the troika of tyranny.” These are sharp words, but words of frustrations due to the Venezuelan opposition’s inability to execute orders from Washington and an embattled president who refused to yield to pressure and daily threats from the Trump administration.

The long and hellish road to Caracas

Since 2002, the road to Caracas has been very long and treacherous for the frontiersmen who desperately want to lay their hands on the Venezuela’s riches. As Chavez survived the coup, regime change specialists in Washington had to go back to the drawing board. Realizing political expediency would not work in Venezuela, they hit the road to find the perfect remedy to restore the status quo ante. That road led them to Belgrade, Serbia, where they dispatched a “small cell of regime change specialists…..operating according to the theories of the late Gene Sharp, the so-called ‘Clausewitz of non-violent struggle.’ Sharp had worked with a former Defense Intelligence Agency analyst, Col. Robert Helvey, to conceive a strategic blueprint that weaponized protest as a form of hybrid warfare, aiming it at states that resisted Washington’s unipolar domination.”

Filmmaker Dan Cohen and award-winning journalist Max Blumenthal meticulously detail that blueprint in the Grayzone—strategy and tactics taken from the playbook of “Otpor, a Serbian protest group founded by Srdja Popovic in 1998 at the University of Belgrade. Otpor, which means “resistance” in Serbian, was the student group that gained international fame — and Hollywood-level promotion — by mobilizing the protests that eventually toppled Slobodan Milosevic.”

This strategy also worked well in Haiti in 2004 when Jean-Bertrand Aristide was overthrown and then bundled out of the country after a myriad of violently staged demonstrations led by André Apaid Junior, affluent member of the upper-class, journalists like Nancy Roc and others..

Leading the charge on the ground against Maduro is Juan Guaidó who until January 22nd when he declared himself president few people knew of. He made such dramatic move a day after he spoke over the phone with US Vice President Mike Pence, and it was not a coincidence when Pence was the first US official to publicly recognize Guaidó’s fictional government.

Grooming Juan Guaidó, the self-proclaimed president of Venezuela, as a transitional figure to replace Maduro has long been part of the plan.  But it takes time, money and effort to craft regime change short of going to war. To make matters worse, the rise of China and the ever-emboldening Russia, in particular in South America, have made that road not only farfetched, but also thorny, for the latter intends to project power anywhere in the world to protect its interests. Russia has invested a lot in Venezuela over the last 20 years.

What we have witnessed the last few years in Latin America was a succession of “constitutional” coups against popularly elected Heads of State only to be replaced by rightwing elements like Jair Messias Bolsonaro in Brazil, Mauricio Macri in Argentina, Mario Abdo Benítez in Paraguay to name a few.  These are all neofascists. Bolsonaro who was quoted to say, “I’m a great admirer of Augusto Pinochet, and the only thing I didn’t like about him was the fact he didn’t kill enough people.”

In essence, Bolsonaro was heralding the return of the Caudillos, the grisly days of the 1960s, 70s and 80s when Latin America was the scene of violent coups, bloodstained repressions instigated by foreign interests. Now, the dude who has been appointed to oversee this latest bloody push to bring down the Maduro government is none other than Elliot Abrams—a man who was convicted after admitting to lying to the prosecutor during the Iran-Contra scandal. During the Reagan administration when he was Assistant Secretary of State, Abrams was said to have presided over the killing fields of Central America where thousands of innocent men, women and children were killed by rightwing paramilitary death squads according to Human Rights Watch.

This newest rightwing offensive has also been reinforced by zealous Colombian president Ivan Duque hellbent on making sure he is the executioner/facilitator in the Machiavellian plan to overthrow Maduro. Using the 2 countries common border and historical ties, Duque has been hard at work to put together a coalition while also using the Lima Group as its launchpad. As a loyal crusader, he has traveled to Washington for photo ops with Donald Trump.

The biggest prize possession here is not democracy which is incompatible with rightwing, neoconservative politics. It is Pedevesa, Venezuela’s oil state company for which Hugo Chavez was briefly ousted in 2002. The people in Venezuela are being used as figurants in a dangerous quest for regime change in their country. Will Maduro survive as Chavez did? For now, he appears to have foiled the move against him. Washington does not have enough proxies on the ground to force him out, and the army largely remains loyal. Juan Guaidó cannot deliver. A series of empty threats have also failed to sway the population. Polls have shown a majority of Venezuelans strongly oppose foreign intervention. But the hawks in Washington will stop at nothing to get to Caracas—even if it means swimming their way across an ocean of coagulated pool of blood.

Note: You can read The Making of Juan Guaidó: how the US regime change laboratory created Vnezuela’s coup leader by Cohen and Blumenthal.

Ardain Isma is a novelist and editing manager at CSMS Magazine . He heads the Center for Strategic and Multicultural Studies. He also teaches Introduction to Research Studies at Embry Riddle University. To see his books, click here.