The storming of Capitol Hill: A heartbreaking moment in US history 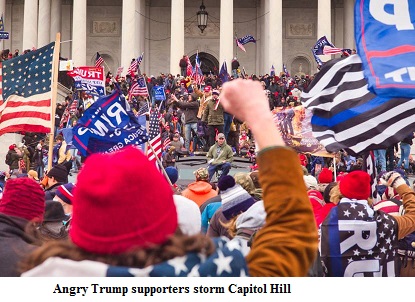 I never thought I could live to be an eyewitness to the horror the whole world watched unfolding on Wednesday in Washington. Eyes glued on the television’s screen, my wife and I witnessed an America in freefall. Thousands of Donald Trump supporters stormed the Capitol, pushing their way into the rotunda, the center of American government. They trashed everything they could lay their hands on. Meanwhile, Capitol guards whose job was to safeguard the property stood almost idly by and did virtually nothing. In some instances, security guards abandoned their posts to make way for the enraged people to go on a rampage as they raised the Dixie flag along with the Trump “hate” flag, the very symbols of white supremacy in America.

I thought I was deep in the trance of a nightmarish dream. Imagine if these people were Black Lives Matter protesters, invading the Capitol? Take a minute to think about it. Dead bodies would have littered the streets. The near passiveness of law enforcement, however, confirmed once more that in America there are justice systems: One for whites and one for blacks. The “goons, thugs, arsonists, and domestic terrorists,” as senator Chuck Schumer called them, came to Washington with a clear mission: stopping the Biden’s certification in Congress—by force if necessary.

While all this was happening, the country was and is struggling to win over a pandemic that has already claimed the lives of more than 300, 000 citizens.

They knew they were doing Donald Trump’s bidding. Understandably, they were not afraid. Why being afraid when you know you have the backing of the president of the United States? Like pep-talking foot soldiers before going to war, Trump, unhinged like never before, administered his last sacrament of hate earlier in the day when he spoke to his angry white supremacists, thousands of them, few yards from the White House.

That same flame of hate was reinforced shortly thereafter by two Republican senators: Josh Hawley of Missouri and Ted Cruz of Texas. These lawmakers will certainly go down in history as coup plotters and traitors to a country they claim to love. After such a travesty, you would think these two individuals would confess their sins and ask for mercy. Not surprisingly, they did not. Their actions, however, have exposed the Republican hypocrisy. Just before the opening session, Mitch McConnell, their leader in the senate, reminded the Democrats of their own disapproval of Donald Trump since he took office. In saying so, McConnell seemed to indicate that the uncontrolled anger of the Trump supporters was the result of Democratic underhandedness, rather than Trump’s fabricated lies backed by Republicans’ hidden racism.

Racial hatred in this country plays well into the hands of both reactionary politicians and the superrich because it prevents uneducated, vulnerable white folks from seeing the root cause of their poverty. These people are being spoon-fed by daily doses of hatred on news media like Fox News, making them believe that immigrants, people of color, Jews, and other minorities are the ones responsible for their deplorable living conditions. Most of these folks live in small towns across America where affordable health care, education, and a decent job are minimal.

Let’s keep in mind that modern-day racism in the United States takes roots from its 19th century ideologue John Calhoun, a senator from South Carolina. On the senate floor on February 6, 1837, John Calhoun, who—to this days—is considered the precursor of the civil war, defended the institution of slavery in a notorious speech during a senate debate on abolition. In the speech, Calhoun declared that slavery was not an “evil,” but rather a “positive good.” And he went on to say that slavery was necessary “to maintain white supremacy.” He supported his argument this way: I hold that in the present state of civilization, where two races of different origin, and distinguished by color, and other physical differences, as well as intellectual, are brought together, the relation now existing in the slaveholding States between the two, is, instead of an evil, a good — a positive good.[14]

Calhoun, to whom many of these white supremacist groups of today pledge allegiance, was far from being sincere to his poor and uneducated white constituency. He believed the only way to forestall public discontent was to feed poor whites with slaves, which would have given them a false since of empowerment thereby preventing them from seeing their abject poverty through the lenses of class antagonism. Calhoun died in 1850, 11 years before the civil war.

Arguably, today’s racism has deep, historical roots—roots that millions of white Americans, rich or poor, refuse to let go. The upper class of this country continues to be the prime beneficiary of this system of shame that has made lopsided laws fundamentally biased against minorities. It’s easier for an enforcer to kill a black person and get away with it than to arrest an angry white arsonist in a Chewbacca bikini. This morning, someone posted this on Twitter: “We spend $750 billion annually on ‘defense’ and the center of American government fell in 2 hours to Duck Dynasty and a [white dude] in a Chewbacca bikini.”

This may sound funny, but the pictures of demonstrators perambulating unafraid under the golden chandeliers of the Capitol rotunda while taking pictures with cajoling security officers showed once more how biased is law enforcement in this country. Last summer, when Black Lives Matter protesters marched in Washington while exercising their constitutional-given rights enshrined in the first amendment, Donald Trump ordered them tear-gassed, called in the national guard from 20 states, and then threatened a ten-year sentence to anyone who broke the law.

Biased from the start 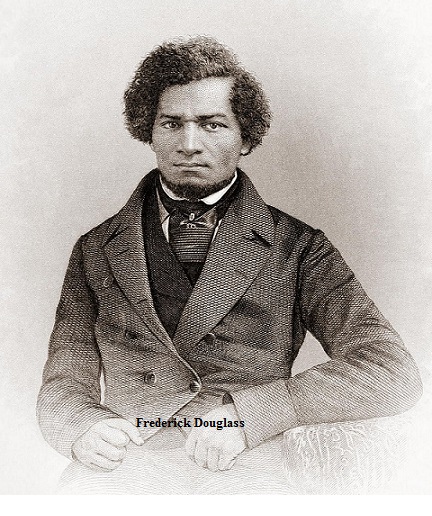 These angry rioters of yesterday were not afraid because they were totally convinced they owned this country; but America will never return to its white-only, pre-civil war era, and the establishment in Washington knows it. However, if racism is so prevalent in contemporary America is because of the half-heartedness from which the emancipation proclamation of 1865 was written. By all historical accounts, Abraham Lincoln’s courageous act was more of an act driven by the necessity of the moment, rather than an act of good faith.  No one echoes this better than Frederick Douglass in the famous speech he delivered in the morning of April 14th 1876 in Washington. Before a legion of dignitaries, including president Ulysses Grant, Douglass, who was born a slave, was uncompromising. “It must be admitted,” Douglass said, “truth compels me to admit Abraham Lincoln was either our man or our model. In his interests, his associations, in his habits of thought, and in his prejudices, he was a white man.” He went on to say that “my white fellow-citizens…you are the children of Abraham Lincoln. We are at best his stepchildren; children by adoption, children by forces of circumstances and necessity…for while Abraham Lincoln saved you a country, he delivered us from bondage, according to Jefferson, one hour of which was worse than ages of the oppression your fathers rose in rebellion to oppose.”

If Douglass’ observation was true then, it is proven to be truer today as racism is overtly manifested in our society through police heavy-handedness and lack of opportunities for the urban poor. So, in playing the racist card, Donald Trump has succeeded in exposing and in widening the wedge that has always existed beneath the surface of this “Great Country of Ours.”