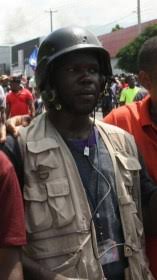 For a Haitian journalist, reporting from the perspective of social justice bears a lot of risks. One can easily be attacked by government’s henchmen, and that was what happened to Robest Dimanche, a prolific reporter from radio Zenith in Port-au-Prince. On November 11th, 2019, Dimanche was reporting from the suburban section of Tabarre when masked men in police uniforms pulled in. According to Dimanche, one of them, a slim individual, pulled the trigger and unleashed several bullets over Dimanche’s head. Apparently, it was an act of intimidation. Dimanche, fearless, faced the masked men with an indescribable stoicism. When one thought that incident could have deterred him, the next day he was accompanied by his lawyers at the prosecutor’s office for a deposition. Soon after that, he was back at work with the same vigor as before.

Radio Zenith has long been a prime target because of its unflinching advocacy on behalf of the poor. Its reporting style has earned it the love and unfettered admiration among the vast majority—disenfranchised—Haitians. So, Robest Dimanche is our journalist of the year.