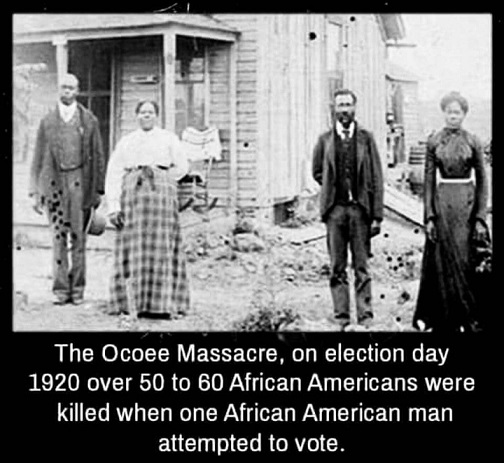 As the presidential election draws near, Florida has become the heavenly prize to win. Its 29 electoral votes weigh heavily in the difficult road to the 270 needed to clinch the presidency. So, it is important to remember the death of more than 60 black residents massacred in 1920 by white mobs in the central Florida town of Ocoee, just 10 miles west of Orlando. Ironically, this happened one hundred years ago, coinciding with the 2020 presidential election marked racial tensions. Yes, during the night of November 2, 1920, groups of white deputies armed with guns, went on a rampage against prospective black voters. The killing was part of a chilling campaign to prevent blacks across the south from reclaiming their right to vote, a right they had lost since the end of Reconstruction.

According to a recent article published on www.ozy.com penned by Sean Braswell, “[E]mpowered and inspired by the 19th Amendment’s recognition of women’s right to vote, Black Floridians began to organize as never before — voter registration drives, marches, secret voter education workshops at churches and lodges. The grassroots democratic effort formed what Paul Ortiz, historian and author of Emancipation Betrayed, calls ‘the first statewide civil rights movement in U.S. history.’ But the powers that be did not care for it.”  Thanks to Ortiz, we now know “There [was] a statewide reactionary movement against the Black struggle to regain the right to vote…And the Ku Klux Klan was one part of that movement.”

As the civil war ended, so too was slavery—abolished by a proclamation that emancipated all slaves in 1865. “But segregation, white supremacy and voter suppression reigned. In addition to acts and threats of violence, Florida’s white leaders used poll taxes, grandfather clauses and voter ‘qualification tests’ containing absurd questions like ‘How many bubbles are there in a bar of soap?’ to render Black suffrage as meaningless as possible.”

And Ortiz goes on to say that the “KKK staged large marches in Jacksonville, Daytona and Orlando designed to intimidate voters. They even turned up in what was then a small citrus town of about 1,000 people, Ocoee, on the evening before the Nov. 2 election, shouting into megaphones that ‘not a single Negro will be permitted to vote.’ And that was not hyperbole. On Election Day in Ocoee and elsewhere in Central Florida, armed white deputies stood guard as self-declared poll monitors. Poll workers routinely challenged Black voters, who could only contest those challenges before the local justice of the peace, who had — conveniently, and by design — gone fishing that day.”

Note: You read the entire article on Ozy.