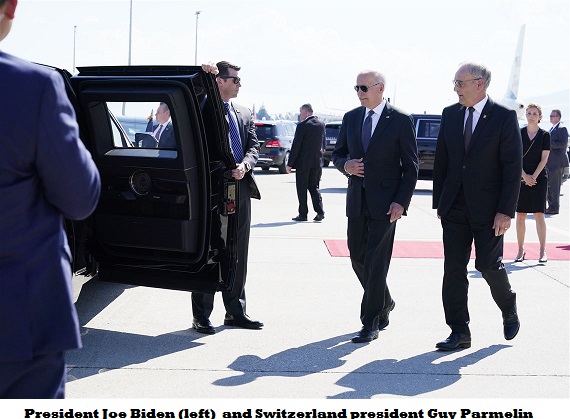 After a busy week of tête-à-tête diplomacy in Europe, Joe Biden has arrived in Geneva for the long-anticipated meeting with Vladimir Putin. The two men are, arguably, the world’s two most powerful head-of-states. Biden landed in Geneva late morning on board of Airforce 1. According to Radio Television Swiss (RTS), he was greeted by Swiss Federation president Guy Parmelin and other dignitaries. Biden then will spend the night under heavy security at the exclusive Intercontinental Hotel there.

The United States and Russia have a lot to talk about, especially in matters of global security. “No two countries have more nuclear missiles ready to launch than Russia and the U.S. Under Trump, key treaties between the nations and lines of communication fell into disuse,” wrote an article in the Time Magazine. And according to a senior State Department official quoted in the Time, “What’s glaringly missing and dangerous, and what was decimated under Trump, was work on strategic stability. We’ve lost all these treaties that were designed to keep this stuff locked down.”

Adding to this is the sensitive matter of Russia’s nuclear arsenal. It has been reported that a large portion of it isn’t covered under the US-Russia nuclear treaty. Among the treaties signed during the Soviet era, all have disappeared, except one: The START treaty which the Biden administration renewed last February. Even then, it was only renewed for 5 years. “This is one domain where they are America’s equal,” says Samuel Charap, a former State Department official and senior political scientist at the RAND Corporation.

According to Time Magazine, which quoted three senior Administration officials, “Much of Biden’s preparation has taken place during his daily intelligence briefing. The leading figure there has been CIA Director William Burns, a former U.S. ambassador to Moscow who worked for Secretary of State James Baker during the collapse of the Soviet Union. Burns and others advocate a return to the Cold War containment of Moscow’s moves.” But that strategy seems at odds with what has been understood: seeking a stable relation with Russia so that the Biden administration can fully concentrate on the rise of China.

The main aim is China

If a nuclear confrontation with the world’s two superpowers seems remote, a protracted trade war with China seems plausible. “The rise of China in the global stage threatens America’s global dominance,” wrote Noam Chomsky. Not surprisingly, the NATO alliance, which includes 30 countries, concluded their summit Monday with a communiqué targeting China, declaring that it poses “systemic challenges” to the military alliance. The strident words used in the document marked a turning point in the US efforts to “organize the world to take on China,” according to Joe Biden’s own words. The final document is a 79-paragraph NATO communiqué in which China’s name is cited a dozen times, in sharp contrast from earlier declarations.

“China’s growing influence and international policies can present challenges that we need to address together as an alliance,” the NATO document states. “We will engage China with a view to defending the security interests of the alliance.”

The communiqué goes on to say that China presents “systemic challenges to the rules-based international order,” alleging that China is increasing its military forces while seeking to collaborate with Russia.

On Wednesday, US Defense Secretary Lloyd Austin issued a directive declaring China to be the “number one” focus of the US military. Foreign Policy commented that the review sought “to infuse the Pentagon, and indeed the entire U.S. government, with the overarching goal of bracing for long-term strategic competition with China.”

Last week, the US Senate passed the so-called “China competitiveness bill,” a massive $250 billion package of corporate subsidies and sanctions that the New York Times termed “the most significant government intervention in industrial policy in decades.”

Can China truly be contained? We’ll have to see.

Note: Ardain Isma is the chief editor for CSMS Magazine.