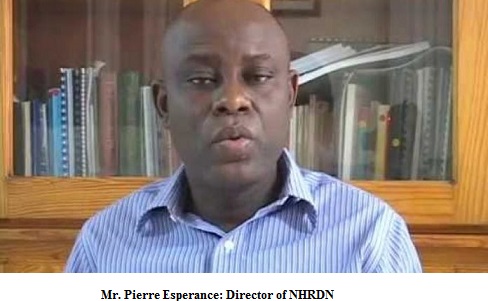 Washington D.C.— Pierre Espérance, who heads the independent National Human Rights Defense Network in Haiti, gave a chilling account on police brutality in the Caribbean nation on Tuesday during a hearing before the House Foreign Affairs Committee. Espérance, who spoke through an interpreter, explained how “Since 2018, the current administration in Haiti has used armed gangs to repress political dissent in Haiti.”

Espérance went on to say there have been at least five massacres of civilians since last year resulting to the killing of 127 people. He also accused Haitian national police of killing almost 200 protesters in the past 18 months. According to Miami Herald, Pierre Espérance was accompanied by a group of Haitian Americans from Miami. Among them was Leonie Hermantin, a representative of Sant La Haitian Neighborhood Center in North Miami. She questioned why U.S. policy still supports Moïse when, for example, it calls for democracy in Hong Kong.

“When it comes to Haiti,” Hermantin told the committee, “the U.S. has made it clear that it believes in elections and democratic process but has ignored the Haitian people’s relentless demands for change.”

You can listen to an excerpt here.