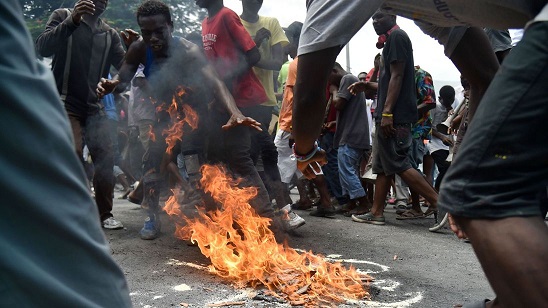 They said the entire Haiti was behind them. They said they were invincible. They said they were on a mission to restore Haiti’s past glory. But last’s week angry protests that swept the country from coast to coast were proofs that their daily lies could no longer hold. Obviously, no one can rule a country only through cunning and intimidation.

The band of thieves, who have been put in charge to do the dirty job of governing Haiti, hit a major wall last week when they tried to sneak their way into raising fuel prices by 50% in one of the world’s poorest countries.

They took a gamble that backfired on their faces. They were betting on last week’s Brazil world cup game against Belgium, betting on a win for Brazil and on the celebration that would follow in order to hoodwink once more a population left to fend for itself while a small group of overseers steal shamelessly.

Never before a country has been so dehumanized, so deprived. But the open defiance of last week served as a vivid reminder that the people of Haiti will never forfeit their rights to live in dignity and in popular democracy. From coast to coast, they rose to take on the neo-fascists, setting ablaze many of their properties, and now they’re demanding the resignation of the country’s subservient president: Jovenel Moïse.

In Pétionville, a suburban town just northeast of Port-au-Prince, demonstrators burned hundreds of luxury cars, several businesses, including fancy homes and hotels like the Oasis and Best Western. Around downtown Port-au-Prince, protests rocked the streets. It was the same scene in many provincial cities like Cap Haitien, Les Cayes, Gonaives etc…

Facing such an unprecedented revolt, Prime Minister Guy Lafontant issued a communiqué, removing the price hike, but it only said that was a temporary measure, which seemed to indicate the move was just a ploy to pacify an angry population.

But who benefits from Haiti’s misery and government mismanagement?

By all accounts, it is a group of recalcitrant business people who had invested on Jovenel Moïse presidential bid with the full backing of the US embassy that remote-controls the Haitian presidency. These folks are Haitians in name only, for they only see Haiti as a huge outdoor marketplace from which they trade their shadowy goods to make money, and lots of it—nothing more.

The revolting misery and the absence of infrastructure to sustain a bourgeois lifestyle in Haiti force these shameless individuals to travel abroad every weekend, to either Miami or the Dominican Republic, to enjoy the extravagant lifestyle totally inexistent in the country from which they steal every day.

Many of them are affluent members of Haiti’s Chamber of Commerce, and many of them lost properties and businesses during last week’s riots. They were reported to be furious with the Haitian government which did not send the security forces to take on the demonstrators. 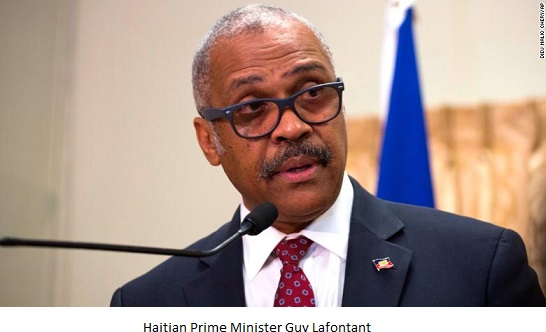 In a sly move to preserve Jovenel Moïse, their stooge as president, they are ready to sacrifice Guy Lafontant, Haitian PM, and to replace him by someone they will inevitably control. And that someone, according to unconfirmed rumors out of Port-au-Prince, is Jean Polème Mathurin, an agronomist from the southern city of les Cayes and a former presidential candidate during the 2015 elections.

There are other rumors, too. To salvage Jovenel Moise and to keep him above the fray, there have been talks about a control board made up of several political figures like former First Lady Mirlande Manigat, Father Williams Smart, political activist Chavannes Jean-Baptiste, Pastor Edouard Paultre and more etc… The so-called board will have the power to oversee government decisions and actions.

If the latter rumor proves to be true, it could provide cover not only for Jovenel Moïse to remain as Head of State, but also, and more importantly, as their lackey who safeguards the interests of parasitic businessmen who had heavily invested in Moïse’s election campaign.

Will the Haitan masses let them? It is difficult to say. I can only infer that this latest public discontent is likely to fail because what Haiti needs is real political independence, and that can only take place through an organized movement. Until then, spontaneous demonstrations like the ones of last week will likely to continue.

Note: Ardain Isma is a novelist and editing manager at CSMS Magazine . He heads the Center for Strategic and Multicultural Studies. He also teaches Introduction to Research Studies at Embry Riddle University. To see his books, click here.