Haiti versus Mexico game was rigged 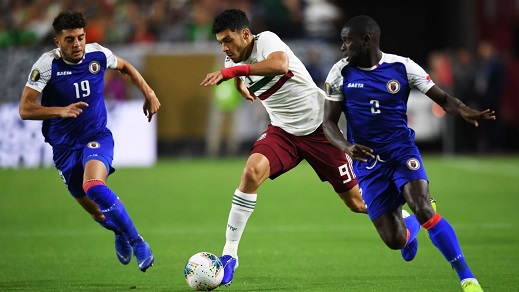 After winning a string of victories, the Haitian national soccer team was within striking distance of winning it all. But last night, the grenadiers failed to advance to the final after losing to Mexico in a penalty kick on the 93rd minute. That penalty call was highly questionable. There was no foul. The Haitian defender did not hit the Mexican player inside the penalty box. Even the Fox Sport commentators could not believe their eyes. At first, the referee let the game continue and then quickly sanctioned Haiti. The Haitian players were stunned, vexed and finally resigned to the reality. Mexico had many chances, but could never score, and Haiti played Mexico to a draw during the first 90 minutes.

The unjust penalty was a gift to Mexico, one would say. That sentiment was echoed by the Haitian coach, Marc Collat, who told reporters that he believed the referee had its preference from the get-go and acted on it when it became clear Mexico could not do it on its own. Collat made those comments during a press conference shortly after the game was over.

The Haitian boys are now heroes of a people yearning for something to hold onto. When everyone dismissed them, they proved the world they were as relevant as any other team. The lesson here is that no task is too big when there is a concerted effort—a team effort—to beat the odds. Despite the misstep last night, their legacy leaves on. Watch the video below.