Haiti: The high-pitched cry for freedom and democracy 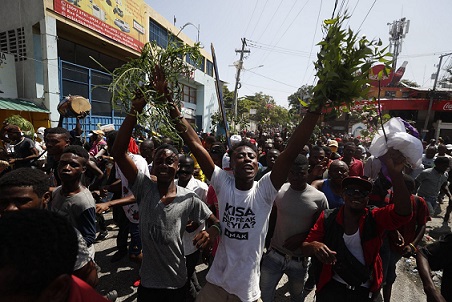 A nation, united and determined to be liberated from the venom of Creole fascism and outright corruption, stands alone at a time when that cry for freedom has never been so loud. They yell, they wail, they die, still victory seems uncertain. Standing in the way is Jovenel Moise, a recalcitrant head of state, backed by entrenched dark forces bent on precipitating the implosion of a country that once was the beacon of freedom in the Americas.

In this piece, it is not important to understand how Haiti has come to this point, for contemporary historians have done a great job explaining it. What is important to recognize, however, is that Haitians’ patience and unsustainable poverty have reached a boiling point. They are demanding change—radical change—and they want it now. To the masses who stand to gain the most, the heart of Haiti now beats at the center of this latest fight. There is no turning back.

Not seen in many generations before, an entire country is holding firm in the face appalling crudity and utter inhumanity. While it is true that economic stagnation plays a major role in galvanizing millions into the streets of every town and city, one cannot ignore that Haitians are demanding more than just food as the western media want people to believe—another blatant form of racism. This is an implicit and disingenuous way to tell the world that Haitians have been so dehumanized to the point where their dignity and survival have been reduced to panhandling for a bowl of rice.

One does not live by bread alone, and the Haitians know that. Restoring their dignity is first and foremost their greatest priority. Dignity here means having a government that works for everyone, not just for a tiny “elite” with no patriotic conviction and few hundred opportunists, petty bourgeois who would stop at nothing, including killing without mercy, to preserve their social parvenus.

Getting rid of Jovenel Moise

Doing away with Jovenel Moise would by no means end this long struggle; but it would certainly herald the beginning of a brand-new and promising chapter in Haiti’s history. For the first time, the cry is not only confined to the removal of one president and to replace him by yet another traditional politician. The grievances are clear and unequivocal. Haitians want to start anew. They want a transitional government that would last perhaps three years with a mandate to rewrite the constitution, addressing the pressing, basic needs and paving the way for nation-rebuilding.

The enemies of Haiti are at an impasse

The biggest headache for Jovenel’s backers is to find a cosmetic solution to this deepening crisis. In the old days, Jovenel Moise would have been history. A stooge, like him, among the many hundreds would have been found in a nano second. Today, it doesn’t mean they are not there, but who wants to govern in name only while being besieged by a popular uprising? Except, of course, Jovenel Moise and the small group of people who work for him.

Haitians will not be bamboozled this time. They are asking for a complete break from the past, from subservient politics. Restoring the country’s old glory is their main aim. They want to be left alone to govern themselves, away from foreign interference.

Each passing day, they edge closer to winning this struggle, and their resolve is hardened every time the “president” opens his mouth to express his refusal to heed the call for him to resign.  Jovenel Moise effectively fell from what was left of his presidency on Friday, September 27, when millions of politically charged Haitians took to the streets, smashing and smearing with human feces every symbol of his government. They forced him underground where he remains to this day.

The deceivers now face a major dilemma. How do they order Jovenel to step aside, as they did to his predecessor, Michel Martelly, without losing their geostrategic stranglehold on Haiti? These are the big-time swindlers —career, Machiavellian dealmakers who are specialized in engineering coups, installing puppet regimes, all in a scheme to keep the country forever pinned down. A Haitian government, patriotic and nationalistic, would never agree to bow to US dictates, and that would certainly mean a major defeat for the United States’ foreign diplomacy—one less vote in the quest for global dominance as Noam Chomsky tells us. It was the Haitian vote that made it possible to expel Cuba from the Organization of American States (OAS) in Punta Del Este, Uruguay in January of 1962 when Haitian foreign minister René Charlmers, under order from Papa Doc François Duvalier, voted against Cuba in exchange for economic aid and the protection from Haitian dissidents.

Jovenel Moise, a neo-Duvalierist, brought shame on Haiti once more when his government, under order from Donald Trump, voted against Nicolas Maduro in recognizing Juan Guiado as president of Venezuela after he proclaimed himself head of state. Venezuela, a country under the late Hugo Chavez, gave Haiti more than two billion dollars in economic aid through a program called Petro Caribe. Under this program, Haiti had received preferential treatment from Venezuela’ s state oil company at a very low price. Haiti would, in turn, use the profit to build infrastructure and create jobs. That money was said to be embezzled by Jonevel Moise, his top associates and his predecessors while the Haitian people go hungry every day. That money has been at the center of this latest fight. People want to know what happened to their money.

Jovenel Moise knew what he was doing when he provided knee-jerk support to the Trump agenda against Venezuela, even as the Venezuelan money made him richer and even as Trump dubbed his country a shithole place. 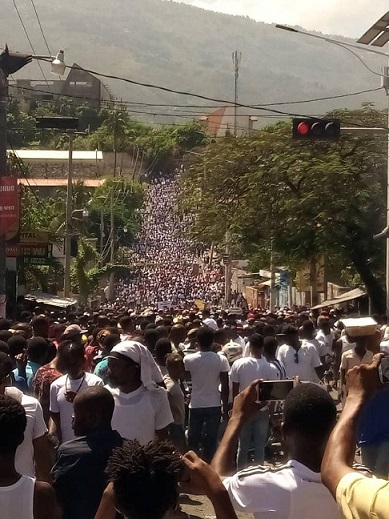 Politics is the art of competing powers where the most powerful wins, and countries forge alliances based on their strategic interests. In bourgeois democracies, everything is seen through the prism of power and influence, not through the lenses of social justice. To this reasoning, Haiti—a small black country with no real significance to the western powers in geostrategic matters, no proven gold, or diamonds, or oil beneath its soil like Venezuela, not Hong Kong, not Ukraine, the new flashpoints in the superpower rivalries—fits perfectly well in the policy of containment. To accomplish this goal, they have used their power and wealth to help elect unpatriotic Haitians who owe their sudden rise to “prominence” solely to foreign interests, not the people who were used as puppets in a show of electoral masquerade.  Understandably, the western media’s silence over the political crisis in Haiti is conspiratorial.

At first, they tried to belittle the growing movement against Jovenel, claiming it was engineered by warlords preying on the vulnerability of young Haitians, hiring them as hitmen in the underworld of prostitution, or as kidnappers who abduct—sometimes in broad daylight—innocent civilians. That may have been true, but the capacity to stage such sustained, protracted, and massive protest is simply not within the reasonable scope of a few senators or boogeymen from Petionville, a wealthy suburban town just northeast of Port-au-Prince. It is a genuine fight that includes all sectors of society—the Church, university students, slum dwellers, the peasantry, etc.

On the flip side of this argument, ignoring Haiti is a good thing because this is precisely what the Haitian people are asking—to be left alone to govern themselves as a free nation capable of addressing its needs without the meddling of foreign countries in its internal affairs. Our forefathers had beaten the odds to give us an independent country—alone. Their bravery and heroism guided them to victory against the world’s mightiest army at that time: the army of Napoleon. Today, Haiti can do it again. However, those who are leading this movement must speak with one voice and, more importantly, must cease all back-channel diplomacy with foreign diplomats in Port-au-Prince unless it will lead to the removal of Jovenel. There are moments in history that require bold moves with great strides to accomplish great deeds. Leaders listen to their constituencies and bow to their demands. Today, the demand is crystal clear: a total break from this vicious cycle of despair to build a new Haiti.

It is time for Haitian leaders to accept this hard truth: one hundred-and-fifteen years of US patronage has taken its toll on Haiti’s misery—all in the name of promoting “democratic governance” and the “rule of law.” Haitian leaders need to rise to this once-in-a-lifetime moment to reclaim their country now suffering from the scorpion’s claws and to lead it to the path to economic prosperity.  After all, the talk of democracy and the pursuit of happiness is meaningless without socioeconomic success to sustain such lofty aspirations.