Haiti: The beginning of the end? 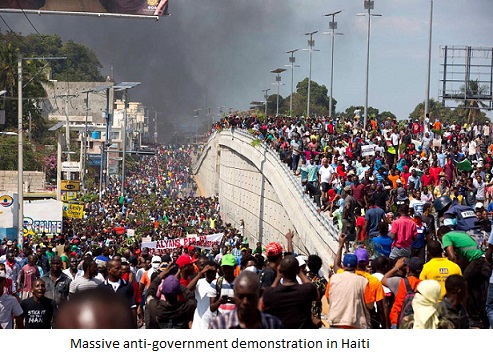 It looks like the Haitian government is at its twilight. Several days of massive mobilization have left no doubt about the desire of the people of Haiti to be free at last or at the very least to rid their country of what they call the “indicted president Moise and his cronies.”

Jovenel Moise thought his hollowed demeanor, his sleazy lies and his deceptive promises could have been enough to pacify an endangered population now determined not to be bamboozled anymore. Trapped in a psychological cage, utterly exhausted and running out of option, the neofascists in Haiti have finally met their match. According to Blondine Jean Philippe, CSMS Magazine correspondent in Port-au-Prince, demonstrators swelled all major arteries in the Haitian capital throughout the day yesterday. Their aim was the presidential palace where Jovenel Moise was believed to have been surrounded by top associates.

The crisis in Haiti has received token coverage in the corporate media here in the United States. Their executives, so entrenched in their imperial attitudes, have never believed in popular democracy. It has always been a tool in their hands as well as in the hands of the neocons who use it wherever it serves their purpose. In Venezuela, they use it to stage a coup against Nicolas Maduro. In Haiti, they use it to suppress the aspiration of a defenseless population yearning for social justice.

This should be a vivid reminder to all empty-headed, naïve compatriots who still believe in a bourgeois democracy, where Washington, Paris and Ottawa rule—through their proxies—their former colonies autocratically. Some gullible Haitians somehow believe these powerful countries would always come to the “rescue” when things get soured in Haiti.

Jovenel Moise, however, will not move as long as his masters want him to stay scooped up in his cubical inside a crumbling palace. He has been accused of embezzlement—stealing more than a billion dollars of aid provided by the Bolivarian government of Venezuela, the same country against which he ordered his cronies at the OAS (The Organization of American States) to vote, while recognizing Juan Guaido, a self-proclaimed president of whom few people knew about prior to January 23. Haiti was the ONLY country in the Caribbean to vote against Nicolas Maduro, the duly elected president of Venezuela from a presidential election that the Carter Center had declared “free and fair.” Why? Because Jovenel owes his job to those who have installed him as a subservient overseer, a modern-day coon who would not hesitate to shuck and jive for Donald Trump, even when he was calling his country a “sh—hold” place.

But the Haitian demonstrators knew better, raising both the Venezuelan and the Haitian flag, they said Jovenel did not speak for them when he endorsed Guaido. He was simply executing an order from his bosses in Washington.

This latest public discontent is not only taking place within the boundaries of Port-au-Prince. According to Blondine, it is a nationwide mobilization designed to give a final blow to Jovenel’s doomed regime.

Note: Bondine Jean Philippe, our new correspondent in Port-au-Prince, contributed to this report.