Haiti on the brink! 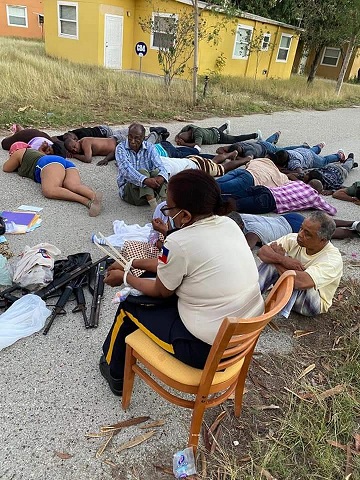 Haiti takes another nosedive to uncertainty today as Jovenel Moise refuses to step. Today marks the end of his term in office, but instead of bowing to the people’s demand, he has embarked upon a conspiracy theory, fomenting a fake story of an attempted coup to go after his most ardent critics.

Port-au-Prince—This article below gives us an overview of the last few days in the Caribbean country. Since February 1, Haitians have been worried. They live in uncertainty. One question dominates their minds: what will really happen in the country on February 7, 2021? The political opposition and various other sectors are calling for the departure of President Jovenel Moise. They rely on article 134-2 of the constitution and the 2015 electoral decree. The opposition demands that Jovenel Moise respect the constitutional deadline. As voices are being raised to demand the president’s departure, other political parties allied with the PHTK are coming to Jovnel Moise’s rescue. According to these political parties, the president’s mandate will end on February 7, 2022 in accordance with article 134-1 of the constitution. They focus on the mathematical calculation following the inauguration of February 7, 2017. They call on the actors to return to the negotiating table to find a peaceful and lasting solution to the current crisis.

During the last few days, the FBH (Federation of Haitian Bars) and the CEH (Episcopal Conference of Haiti) two important institutions in the country have also expressed their views on the current crisis. The FBH underlines that the constitution of March 29, 1987 amended by the law of May 9, 2011 calls for the departure of the president on February 7, 2021; and in a message published on February 2 in a conference of the bishops of the Catholic Church, the CEH calls on President Jovenel Moise to apply the law as he had done for deputies, senators and mayors. They remind Moise that the law is one for all. “No one is above the law,” the bishops wrote. On February 1 and 2, a strike was launched by the collective of unions to ask President Jovenel Moise to bow out on February 7 according to the 1987 constitution. They also denounce acts of kidnapping ravaging the country.

All activities were paralyzed in the metropolitan area. Public transit was shut down. Schools remained closed following these 2 days of strike. Kidnapping, acts of violence and assassinations continue to sweep the country. The group Fantom 509 reappeared this week. In the commune of Croix Des Bouquets, armed individuals tried to take control of the area. This has caused the death of a baby set on fire. In the cities of Cabaret and Arcahaie, the popular mobilization against the president continues. In Cap-Haitien, a young man was killed in the district of Cité Lescot.

Note: Fabienne Garçon is our new collaborator. She lives in Port-au-Prince.