Haiti: Morgues and hospitals swelled to the brim! 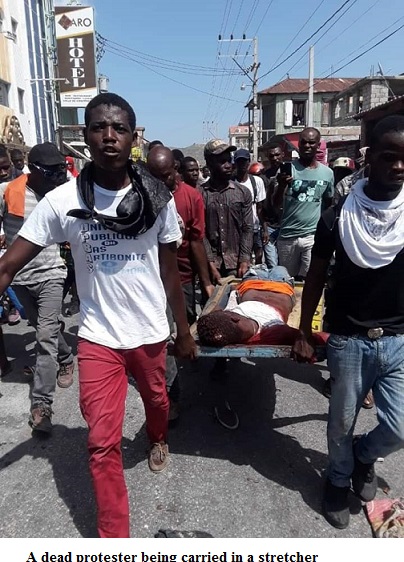 Facing a popular uprising, Haitian president Jovenel Moise has resorted to extreme violence in a desperate attempt to hold on to power. According to news sources out of Haiti, the government seems to have given carte blanche to henchmen dressed in police uniforms to shoot on sight everyone who dares to oppose his increasingly despotic regime. Yves Duchet, CSMS Magazine correspondent in Haiti, informed us that every day, militants on the frontline are dying.

Radio Zenith now renamed Radio Nationale for its commitment to working on behalf of the downtrodden reported live on Tuesday the shocking cry of militants in Petionville after men in police uniforms opened fire on defenseless street vendors along a twisty road that leads to Route Frère, the northern part of town. Pastor Grégoire, a well-known preacher and a champion of the poor in the Petionville area, was struck by several bullets in his lower legs which then swung loose like boneless limbs. He fell to the ground, blood springing out of his legs, where he spent more than an hour before being rescued and taking away to a nearby hospital.

Every popular neighborhood has been under attack, including Belair, Tabar, La Saline, Raboto, La Forcette. The death toll is rising as confirmed recently by Amnesty International. Bodies are being carried away to unknown destinations, denying the victims’ relatives the right to bury their dead. The pictures are gruesome. Morgues and hospitals are swamped, beyond capacity. Haiti, tragic victim of historical injustices, bleeds—ALONE—as the world looks the other way.

If there was any doubt about the intention of the Creole fascists, this appalling form of unhinged violence is a chilling testament to what they’ve always intended to do before they finally flee. And they will.

On Tuesday night, Toussaint Louverture International Airport near Port-au-Prince was the scene of a major commotion when a man was arrested after being found carrying a large caches of weapons, include assault rifles with high-capacity magazines. According to Miami Herald, his name is Jacques Yves Bastien Duroseau, a retired soldier from the Marine Corps of Haitian origin. The big question is: How did this man manage to get through the world’s most secured custom service? He arrived in Port-au-Prince on board an American Airline’s flight from Miami.

By killing indiscriminately, their aim now is to inject fear, but blood-stained repression à la Papa Doc will not work. Certainly, it is too late to silence a people who has finally awaken from his slumber and now determines to put an end to this madness. They can’t kill 11 million Haitians. Despite the odds, the population will not retreat. The country is still in a total locked down. On Tuesday November 18th, a nationwide protest is expected. To many Haitians, death no longer matters. Fighting for popular democracy is the prize to win for which they are ready to make the ultimate sacrifice.

Note: Our correspondent in Port-au-Prince Yves Duchet contributed to this report.