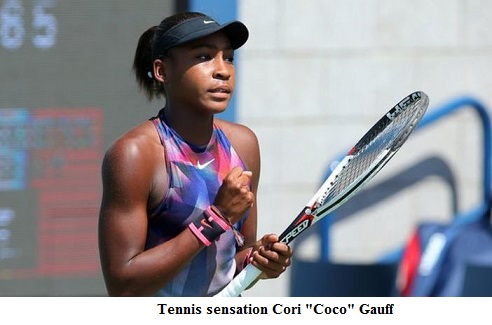 Cori “Coco” Gauff is the fifteen-year-old tennis prodigy who beat legendary tennis player Venus Williams on the first round of the Women’s singles competition at the annual Wimbledon tournament this week. According to People magazine, the thirty-nine-year-old, Venus Williams stated after the match, “She put the ball in the court, much better than I did. She served and moved well. It was a great match.” A native of South Florida, Coco Gauff lives in Delray Beach, a town in southern Palm Beach County. Before her recent success, she was ranked number 301 in the world. Now, she must be one of the top tennis players.

Until last week, few people outside of the tennis world knew about this girl. But Gauff had long established herself as a young tennis phenomenon before defeating Venus Williams. She had won numerous international junior titles. The athletic genes may have been enshrined in the teenage tennis wonder from her parents. Her father Corey Gauff was a former Georgia State University basketball player. He now serves as Cori’s personal tennis coach. Cori’s mom Candi Gauff was once a star runner at Florida State University for the track and field heptathlon competition.

After defeating Venus Williams, Gauff became the youngest player to win a match since American player Jennifer Capriati won the Junior Orange Bowl in 1991 at the age of thirteen. According to CNN, the fifteen-year-old Gauff stated during a press conference “It’s crazy because before I played against Venus only one little kid asked for my autograph. Then, the next day after I won there was a large crowd of people screaming for a picture with me. It’s pretty surreal how your life can change in a minute after defeating a legend.”

Coco Gauff is our person of the week.