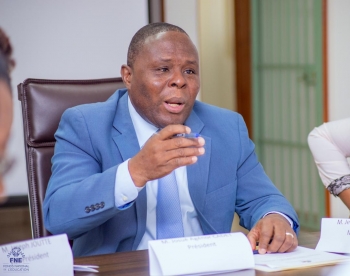 Last November, CSMS Magazine published an opinion piece about the Haitian Interior Minister, Josué Agénor Cadet. Though, the publication was a consensus among the magazine’s editors, few lines, in my view, were considered inappropriate and offensive. For that reason, the article was reedited shortly after its publication. For instance, the article refers to Agénor’s origin as “an illegitimate” son of his father, and that he was a “roadside panhandler” when things were rough in Port-au-Prince in his younger years.

I have always believed that human dignity can in no way be viewed through the prism of someone’s origin or his upbringing because nobody is responsible for where he was born, who and what his parents are or the precarious conditions in which he and millions of people around the world live. These are the universal—core—values I wholeheartedly uphold and that I always teach my children and share with relatives, friends and colleagues. I’m deeply sorry if readers were offended.

With all fairness, Mr. Agénor Cadet is not the only one from my beloved town of Saint Louis who works for this unpopular and repressive regime of Haiti. There are other individuals from that town who have also sold their souls to the devil. These are folks with whom I grew up and with whom I used to spend hours discussing the plight of millions of Haitians living in one of the most horrific conditions. Today, they are found on the opposite end of the struggle for social justice, working as hard as they could to make sure popular desires will never become concrete realities. It is regrettable.

You can also read: