Biden and Putin ended their summit with no concrete results 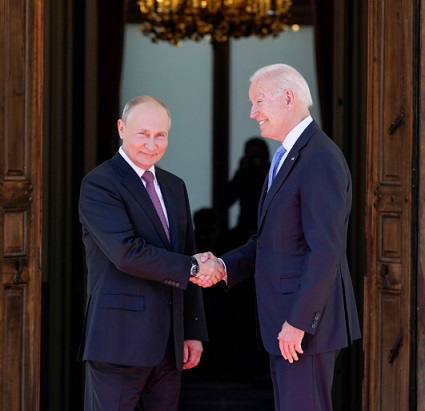 Geneva, Switzerland was at the center of superpower diplomacy earlier today as Joe Biden and Vladimir Putin met on the bank on Lake Geneva inside the sumptuous villa La Grange for their first official meeting at head-of-states. After a few minutes of photo ops, the two men were led inside by Guy Parmelin, president of Switzerland. At the end of the meeting, both men held their own press conference as it was previously announced. We do not know for sure all the details of what was discussed, but we know in the wake of the meeting, Putin said the talks were “quite constructive.” The Russian president went on to say he and Biden agreed to return their ambassadors to their respective posts in Washington and Moscow. Furthermore, Putin also stated he and Biden had reached an agreement to start discussions on cybersecurity.

Prior to the meeting, Biden acknowledged that Russia and the United States are the world two superpowers, and that they need each other for global stability. “The bottom line is I told President Putin that we need to have some basic rules of the road that we can all abide by,” Biden told reporters after the meeting. He then described the meeting as “positive.”

This meeting has confirmed that in world affairs, Russia is indeed an unavoidable player. The Russian president walked away confident, giving the fact that it was Biden who has invited him to talk, and it was also Biden this morning who invited him to meet again in 6 months.

Biden and Putin released a joint statement outlining their shared objective to continue working toward a more stable and predictable relationship between the two nations that includes reducing the threat of nuclear war. “Today, we reaffirm the principle that a nuclear war cannot be won and must never be fought,” the two leaders said.

The statement also said the United States and Russia would continue working together on future arms control through “an integrated bilateral Strategic Stability Dialogue in the near future that will be deliberate and robust.” They also said their countries have “demonstrated that, even in periods of tension, we are able to make progress on our shared goals of ensuring predictability in the strategic sphere, reducing the risk of armed conflicts and the threat of nuclear war.”

The corporate media did not seem pleased with the results of the summit. There was a feeling that Biden did not get tough enough with Putin, especially with regards to the issues of cybersecurity and human rights violations. CNN journalist Kaitlyn Collins pressed Biden on the question whether or not he trusts Vladimir Putin. An irritated Biden snapped at Kaitlyn. “I’m not confident. I said what will change their behavior is if the rest of the world reacts to them and it diminishes their standing in the world. I’m not confident of anything. I’m just stating the facts.”

When Collins pressed Biden to clarify his statement, Biden was blunt.  “If you don’t understand that, you’re in the wrong business,” he said, shaking his finger at Kaitlyn.

Note: CSMS Magazine’s Yves Duchet, who was in Geneva, contributed to this report.