A stunning development in Brazil: Lula has been freed! 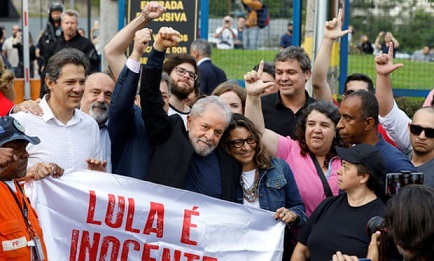 In a dramatic reversal, the Brazilian supreme court overturned its own decision and ordered the release of former president Luiz Inácio Lula da Silva from a prison in Curitiba where he was serving a 12-year sentence of which he served 580 days. A champion of the poor, Lula presided over an astonishing period of economic growth from 2003 to 2010. His socioeconomic policies have substantially narrowed the gap between rich and poor, lifting millions of Brazilians out of poverty. So popular was the former president that it was easy for Dilma Rousseff from his Workers’ party to succeed him after she easily won elections in 2010.

In a two-stage “constitutional” coup, the Brazilian upper class conspired with powerful allies in the judiciary and the military hierarchy to first depose Dilma and then jail Lula supposedly for using state money to fund social projects for the poor. Lula always maintains his innocence. He remains to this day the most popular politician in Brazil and one of the most beloved head of states in Latin America.  Even in prison he has cast a long shadow over political debate in Brazil.

A delirious crowd of supporters greeted Lula as he walked out of prison on Friday outside the federal police headquarters in Curitiba.

This is a major blow to rightwing politics across the world guided by the neoliberals now in complete retreat in the wake of massive protests spreading from Haiti, Latin America and Southeast Asia. The people have had enough! The liberation of Lula is likely to reinforce the fight against the country’s current president Jair Bolsonaro, a far-right politician and a good friend of Donald Trump and Chilean rightwing billionaire president Sabastian Piñera who, like Jovenel Moise in Haiti, now faces a popular revolt that threatens his presidency.

Everyone now hopes for a paradigm shift, a geostrategic realignment in the struggle against neoliberalism now in total political bankruptcy. Today is a wonderful day for those who believe in social justice. This is bad news for the Lima Group nicknamed the Rightwing Club. Maduro of Venezuela, Evo Morales of Bolivia are the happy campers today.