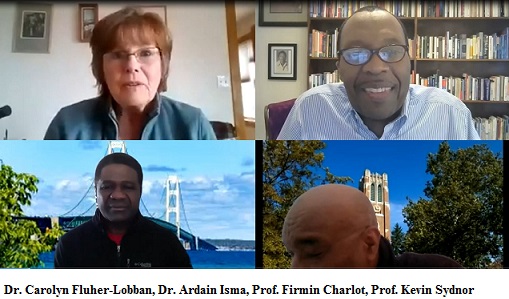 Two weeks ago, I had the privilege to sit down for a historic conversation with Dr. Carolyn Fluher-Lobban, Professor Firmin Charlot, and Professor Kevin Sydnor. It was a conversation about one of the most brilliant Haitian intellectuals of the 19th century: Anténor Firmin.  Growing up in Haiti, I knew little about Anténor Firmin’s great works. Like most school children in Haiti, all I knew was that he was an influential politician who took up arms to seize power under the banner of his own political movement called Firminism. It was not until I immigrated to the United States as a young man in the early 1980s that I began to learn about Firmin’s intellectual prowess.

Years later when I was a professor at Nova Southeastern University, a colleague brought me a copy of Firmin’s masterpiece, “The Equality of the Human Races,” published in 1885 as a direct response to Arthur De Gobineau who, in 1850, published “The Inequality of Human Races,” which was an attempt to legitimize racism. De Gobineau spent a big part of his book, using Haiti’s constant problems post-independence era to prove his points. Slave owners in the South quickly jumped on the book to justify slavery. Not surprisingly, Firmin’s response was largely ignored in Europe as well as in North America.

In the video below, you will find a different conversation this week—an academically-centered one. As the race issue persists in today’s society, Firmin’s book, one must say, is as relevant as it was in 1885, nearly 140 years later.

Dr. Fluher-Lobban is an anthropologist and Pan-Africanist, who has spent many years doing research in Sudan as well as in Egypt. She is a co-founder of the Sudan Studies Association. Dr. Fluehr-Lobban is a specialist in Islamic law, anthropology and ethics, human rights, cultural relativism, and universal rights. She is the author of several texts books on Islamic societies and on race and racism.https://en.wikipedia.org/wiki/Carolyn_Fluehr-Lobban – cite_note-3 Dr. Fluher-LObban wrote the compelling introduction for the English version of Anténor Firmin’s famous book De L’égalité des Races Humaines. (The Inequality of the Human Races).